Softball Strikes Out with 0-3 League Start 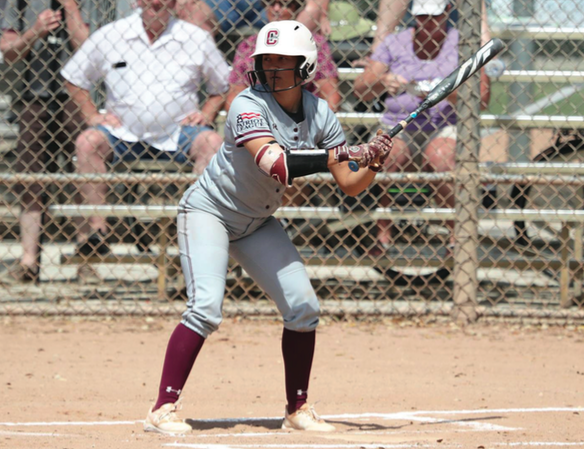 Returning from spring break, Colgate softball opened Patriot League play with a two-day, three-game weekend series against the Bucknell Bison on March 23 and 24 in Lewisburg, Pennsylvania. The Raiders dropped the first game 1-6 on Saturday, before a Sunday double-header. On Sunday, the Raiders narrowly lost the first game 8-10, before falling 1-9 in the closing game of the series.

Opening the series on Saturday, the Raiders came in with a then 11-12 record and the Bison stood at 10-15. The Bison opened the scoring in the first inning with two runs, the score remaining unchanged until the top of the fourth inning. In the top of the fourth, senior infielder/outfielder Meghan Romero blasted a pitch over the wall in the right side of the infield for a solo home run, getting the Raiders on the board. After giving up two runs in the first inning, sophomore pitcher Bella Crow settled down, giving up only one hit until the fifth inning. The Bison, however, blew the game open in the fifth, scoring four runs, going on to win 6-1.

The next day, the Raiders looked to forget their last game. First-year outfielder Rebecca Johnson opened the game strongly for the Raiders, hit- ting an infield single. Romero followed with a single of her own. Johnson and Romero appeared to be stranded, as two outs followed. Junior outfielder Jordan Miller then hit a single to shallow right to bring Johnson home and get the Raiders the early lead. Romero was then stranded on third, with the Raiders then lining out to second base. The Bison then responded with a two-run inning to take the lead. The Raiders then continued there strong offensive play with a three-run inning to retake the lead at 4-2. Senior infielder Lauren La Terra opened the inning with a double off the wall in right center, junior utility player Cayman Coughlin was then brought in to pinch run. Coughlin made it to third on a Raider ground out to second. Johnson was then walked, clearing the way for Romero to blast a 3-run home run off centerfield. The Raiders then managed to shut down the Bison in the bottom of the second. The Raiders failed to score the next two innings, with the Bison managing a run in the bottom of the third. The Bison then erupted for a six-run inning in the fourth, regaining the lead at 9-4. The Raiders then worked three hits in the top of the fifth, but only managed one run and the Bison extended their lead to 10-5 with a run in the sixth. The three-run homer in the seventh by Miller that brought home junior catcher/utility player Virginia Irby and senior catcher Madison Aston proved to be too little for the Raiders, as it was followed by two ground outs, leaving the score stuck at 8-10.

In the final game of the series, the Bison jumped out to an early two-run lead in the bottom of the first. The Bison augmented their lead in the third and fourth, adding a further three runs and four runs, respectively. The Raiders were able to avoid the shut-out when Johnson singled to right field and brought home pinch hitter Aston, but the Raiders still dropped the game 1-9.

The Raiders will next face the University at Albany, SUNY Great Danes, having a two-game series on March 30 and 31 in Albany, New York. The Raiders will come in trying to bust out of their four-game losing streak and improve their 11-15 record against the 10-8 Great Danes.