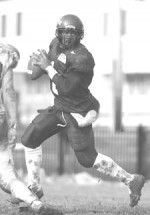 “Eventful” would be an understatement when describing Colgate’s 2003-2004 school year. Campus was abuzz with Greek Life drama, A-list speakers, blistering winter weather and an infestation of network viruses. Highlights of the year included the completion of the O’Connor Campus Center (Coop), the hiring of Provost and Dean of the Faculty Lyle Roelofs and the impressive seasons capped by Colgate athletic teams. There is no sign of excitement slowing down as the Greek controversies continue, the lecturers line-up and the campus prepares for library renovations.

Colgate Names New Provost University President Rebecca Chopp announced the hiring of new Provost and Dean of the Faculty Lyle Roelofs on January 16, 2004. Former Provost Jack Dovidio’s leave of absence prompted a search of over 100 applicants for the position, which concluded with the hiring of Roelofs. “We were looking for a person who demonstrated exceptional leadership skills, worked well with people, had a distinguished scholarly record and understood the importance of teaching at a highly selective liberal arts college,” Chair of the Search Committee and Professor of Geology and Natural Sciences Rich April said. “We believe we found all of these qualities in Professor Roelofs.”

Got Greek?Greek life was the subject of a great deal of controversy last year, culminating with the permanent withdrawal of recognition of Kappa Delta Rho (KDR) in November. Recognition was withdrawn after KDR failed to eliminate hazing from their new member education program and repeatedly violated their relationship statement with the University. Many students felt that the punishment bestowed upon KDR was excessive and students staged a sit in located in James B. Colgate Hall to protest the decision. Ultimately, Colgate’s decision remained unchanged and KDR closed its doors at the end of the fall semester. 2004-2005 promises to be a landmark year for Greek organizations at Colgate.

Coop It Up The O’Conner Campus Center (Coop) underwent extensive renovations last year, transforming it from a cozy, yet squalid establishment to a state of the art futuristic ski lodge. New tables, chairs and lighting fixtures were among the many changes that contributed to making the Coop nearly unrecognizable to returning students. Additional alterations included the installation of new food options such as a Mongolian wok, a smoothie bar and a pizza, pasta sandwich station. While most students enjoyed the modifications, others complained about the price increases, menu changes and ultramodern new design. While expensive, the Coop overhaul provides students with a modern and accommodating facility to eat, work and socialize.

Famous Faces Address StudentsStudents heard an earful last year from a variety of guest speakers, including Senator Hilary Clinton, Reverend Jesse Jackson, comedian Dave Coulier and political analyst Anne Coulter. The former First Lady arrived at Colgate after attending a conference at the University’s Upstate Institute, where over 70 academic, business and civic leaders met to discuss the regional economy. Clinton touched on several topics including problems challenging the economy in Upstate New York and the influence higher education has on creating new jobs in this area. She emphasized the importance of creating a more attractive business environment for students to return to after graduation and she explained the problems caused by outsourcing jobs in our area’s market.Reverend Jesse Jackson caused quite a stir after his discussion to a packed audience in the University Chapel. In conjunction with Black History Month, Jackson called on Colgate students to remember the challenges African Americans have faced in the past and to improve these conditions in the future. Students were motivated by his talk to create a Rainbow Push Coalition group here on campus.Better known as Uncle Joey from the classic TV show “Full House,” Dave Coulier tried to make students laugh during his stand-up routine in the Hall of Presidents. Usually outspoken liberals were quieted during Anne Coulter’s visit to Colgate. A flamboyant conservative, she shared her opinions and criticisms on racial profiling and the Democratic Party.

Parimi and McCormack Win the TicketIn an extremely close election last April, seniors Ram Parimi and Casey McCormack were voted Student Government Association’s (SGA) President and Vice-President for 2004-2005.Despite low voter turnout, the buzz around the election was intense as four qualified candidates battled for the positions. Former SGA President Bart Hale wished more students took the initiative to vote, but he believes the SGA is in good hands for the future.”We’re very excited about what we can do to make positive changes at Colgate next year,” Parimi and McCormack said. With issues such as the future of Greek life and campus renovations looming, this year’s SGA will be busy voicing student ideas, concerns and opinions.

Infected FilesColgate’s IT department was kept extremely busy last year protecting and upgrading the network. Viruses and worms, such as Sasser and Mimail, were major challenges, frequently crippling email and disabling internet access. SOURCe put in an immense number of man hours exterminating these bugs, however, despite their best efforts and expertise, the campus was often left without email or internet access for several hours at critical times.Small numbers of infected computers were able to spread their contagion throughout the campus and infect myriad students and faculty. Frustration on campus spread just as rapidly as the frequent and untimely network collapses prohibited many from performing important tasks. In response to the proliferation harmful internet material, ITS performed several network upgrades throughout the year to secure the network and strengthen it against attackers. This preparation is vital, as the university will undoubtedly face many new and unforeseen challenges this year.