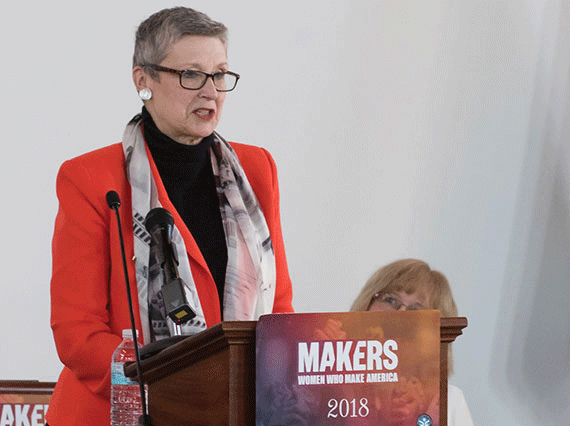 The Center for Women’s Studies and the Konosioni Senior Honor Society co-hosted a Brown Bag titled “Challenges Facing the Immigrant and Refugee Communities in Central New York” on Tuesday, March 19 in the Center for Women’s Studies. Featured speakers included Professor Sally Bonet from the Department of Educational Studies and Fabiola Ortiz from the New York Immigration Coalition.

In order to jumpstart people’s minds and consider the importance of this subject, attendees were given an index card and asked to write down their relation to the refugee and immigrant community, what brought them to the event and why this topic interests them.

The moderators and panelists then began the conversation by explaining why the topic of challenges facing the refugee and immigrant community is personally significant to them. They spoke about the challenges faced by themselves, their families and those they’ve worked with when someone has “never know what home was” or “home is so many different places,” according to Bonet, a Middle Eastern immigrant.

Ortiz, an immigrant from Northern Mexico, also spoke on her personal difficulties with immigration.

“I feel fortunate that I have a Green Card but that was challenging because my partner is a woman,” she said.

Much of Ortiz’ work is also centered around the immigrant population in Central New York, as she is a PhD candidate in anthropology and also works as a labor organizer with dairy farmers in the area, researching problems and helping them mobilize. She wanted to remain in the area and work with dairy farmers because it’s the largest sector of farm workers in the state. As year-round residents, there was an effort already forming among farm workers in Central New York. It was developed as an alternative to unions, working to overturn challenges that the refugee and immigrant population in the region face.

One of the major problems for refugees and undocumented immigrants is the lack of ability to obtain a driver’s license; in New York, you cannot obtain a driver’s license without a social security number, creating a labor issue that impedes workers from getting around. This is especially difficult because border control patrols within 100 miles of the border, and if someone is caught while running an errand, they can face serious repercussions.

“A nasty thing happening in upstate New York is collaboration among law enforcement. Someone is driving because you need to take your daughter to a doctor’s appointment, and you get stopped because of a traffic violation or because they racially profile you. They don’t detain you. They call border patrol, border patrol comes, detains you and begins deportation proceedings,” Ortiz said.

The Brown Bag emphasized that while we often hear about ICE proceedings, actions and policies against immigrants and refugees, it is easy for us not to realize that these are all impacting local populations, not just at the Mexican-U.S. border.

Another point brought up during the event was the importance of educating all generations of immigrant and refugee families, not just their children. Bonet discussed the dangers of overemphasizing the experience of the youth without focusing on the family unit. Several problems arise when we do this. Education for adult refugees and immigrants in America is not currently aimed at decoding, reading, writing or analysis, but instead learning how to properly resettle into American society. However, the entire family needs to have access to education in order to reap the benefits of coming to America, rather than restricting it solely to the children in the family. Additionally, in order to understand the experience of American immigrants and refugees, you have to understand the experience of the entire family. The lack of education provided to adults in addition to the fact that they only receive medical insurance for eight months, and three months of case management makes it incredibly difficult to transition into life in America, a place where so much is expected of them and so little help is given.

The Brown Bag aimed to educate attendees about the realities of immigrants and refugees in the U.S., especially in Central New York, an area that isn’t usually at the forefront of discussions of issues surrounding these populations. Ortiz also hoped that it will spark Colgate students to engage more deeply with these issues.

“I would like for people to be aware of the organized efforts to improve conditions. One of the best things you have as a student to give is your time to do this kind of advocacy so everybody can live a normal life and be able to do things with their families. These people are here, boosting our economy and communities so it’s the least we can do. It’s good to keep in mind that when we help the advancements of these communities all of us win because they’re working towards the benefit of us all,” she said.