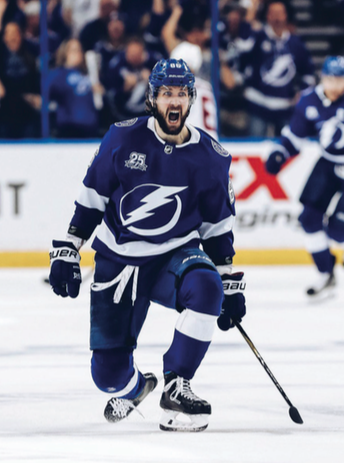 Led by forward Nikita Kucherov (above), the Tampa Bay Lightning have quickly risen to the top of the Eastern Conference in the NHL.

With 15 games games remaining in the regular season, the Tampa Bay Lightning have been surging. The Lightning recorded their 50th win on Saturday, March 2, against the Ottawa Senators, tying the 1995-1996 Detroit Red Wings as the fastest team in league history to reach that mark. The Lightning beat the Senators 5-1.

Tampa Bay are in first place in the NHL. The Calgary Flames sit second at 89 points and the Boston Bruins trail behind them with 87. The Lightning have 104 points.

Much of the Lightning’s success can be attributed to their star forward, Nikita Kucherov, who leads the league with 75 assists and 106 points. At 25 years old, Kucherov has back-to-back 100-point seasons. Kucherov’s dominance has helped the Lighting average a league-leading 3.82 goals per game, with a league leading +84 goal differential.

Much of Kucherov’s success comes in the power play. Tampa Bay leads the NHL in power play percentage. The Lightning have a power play success rate of 28.9 percent. They also lead the league in penalty kill percentage, killing off 86.0 percent of their penalties.

Tampa Bay’s defense is led by 6’6 Victor Hedman. In 58 games this season, Hedman has recorded nine goals and 32 assists for a total of 41 points. Hedman is a +15 on the season, averaging almost 26 minutes of ice time per game. Hedman is the defending Norris Trophy winner as the league’s top defensemen.