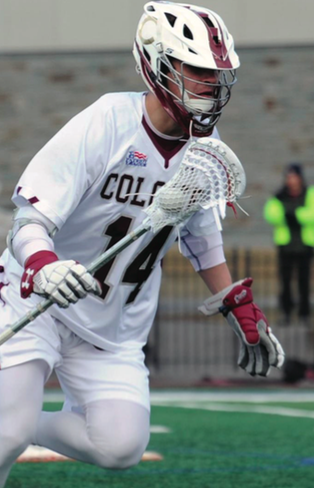 Raiders Cool Off After Hot Start To Season

Colgate Men’s Lacrosse team entered last week 3-3, after tallying a loss to Canisius on March 16. Only three days later, the Raiders took the field to avenge their loss against the Hobart Statesmen. The game, held on Tuesday, March 19 at Andy Kerr Stadium, was the 1,000th game in the program’s history.

Although the Statesmen quickly took the lead, scoring the first goal only one minute into regulation play, the Raiders were not deterred. Sophomore at- tacker James Caddigan scored a goal shortly thereafter and was assisted by junior attacker Griffin Brown. Colgate’s next goal was scored by freshman midfielder Marshall Terres and assisted by sophomore attacker Mike Hawkins. This was Terres’ first career goal. Un- fortunately, this landmark goal was the last to be scored by the Raiders through the second quarter. The States- men went on a six-goal run, that went unanswered until sophomore attacker Bobby Goggin scored an unassisted goal with five minutes remaining in the third quarter. This proved not to be enough to spark a comeback for the Raiders, as the Statesmen answered with another five goals that again went unanswered to until late in the fourth quarter.

Colgate’s Terres hoped to ignite a comeback with five minutes remaining in the fourth quarter, tallying his second goal of the competition assisted by freshman attacker Ryan Decker. This was followed by a goal scored by Brown and assisted by senior attacker Sam Cleveland. To close out the half, Terres scored his third goal, this time assisted by junior attacker Lewis Langford. The final three Colgate goals made the final score 6-12. The loss moved the Raiders’ record to 3-4.

“At the beginning of the year, we were just playing and we were having fun. The energy has just died down in a natural way. Think about all of the highs we’ve had this year. New coaching staff, we beat Syracuse and get on a roll. But maybe it’s the juice that carries you, and we’ve got to find it again. Our guys in the locker room after the game, we’re talking about finding that juice, finding that swag a little bit. How can we get to the next level energy-wise?” Head Coach Matt Karwek said.

The Raiders sought to find this “juice” in their preparation for their game on Saturday, March 23, against the No. 18 NCAA seed Army. The team traveled to West Point, NY, to face the Black Knights.

Army kicked off the scoring for the day, putting the first two goals of the quarter in the back of the net. It was not until the first quarter was nearing its final seconds that the Raiders answered back. With one minute remaining, junior attacker Nicky Petkevich scored a goal assisted by Cleveland. With only 16 seconds left in the quarter, the duo struck again, notching the second goal and tying up the competition. They then broke this tie, taking their first lead of the game, thanks to senior midfielder Matt Donovan’s unassisted goal at the beginning of the second quarter.

This lead, unfortunately, was soon thwarted as the Raiders were outscored 2-3 in the quarter, making the score 4-5 entering the half. Despite a second strong second half from Brown, who tallied three goals in the fourth quarter alone, the Black Knights ultimately reigned victorious, claiming a 13-8 victory. This loss brought the Raiders’ record to 3-5.

“Although the past couple of games have been tough, we are just trying to get better every day. Our focus hasn’t moved from that. We have some big game Patriot League games coming up, and if we just play like I know that we can, we will be successful.” Brown said. The Raiders will take field next on Saturday, March 30 in Baltimore, Maryland against the Loyola Greyhounds at 1 p.m.