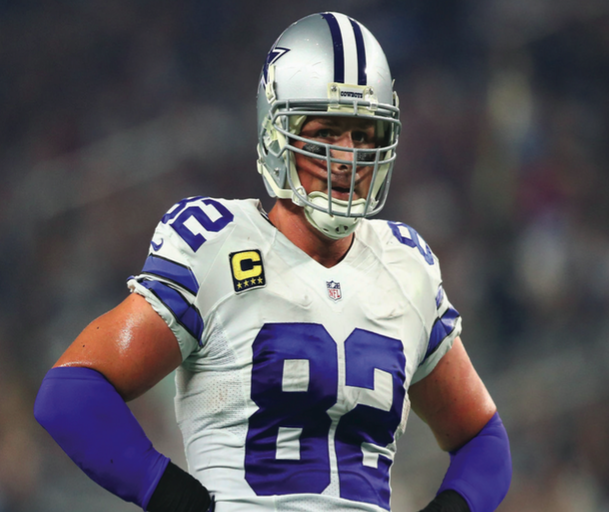 After just one year, Jason Witten announced that he will be coming out of retirement to play for the Dallas Cowboys in the upcoming NFL season. s

Jason Witten’s Hall of Fame induction will have to wait a couple of more years. That is because on February 28, after one year away from the game, Witten announced he will be returning to the Dallas Cowboys for his 16th season.

“The fire inside of me to compete and play this game is just burning too strong,” Witten said in a statement.

Witten, who will be 37 by the beginning of next season, spent last year as a commentator for Monday Night Football. He had to fill the hole left by John Gruden, the beloved commentator who left the booth last season to return to coaching.

The inexperienced Witten struggled in the booth, failing to meet the expectations many people have for one of the biggest games of the week. His slip-ups and lack of personality while calling games became somewhat of a running joke within the league the entire year. Throughout his career on the field, Witten always looked comfortable and in control, something he never was in the booth. We’ll get to see the return of #82 for America’s team, one of the greatest tight ends of all time. But what does this mean for the Cowboys?

Jason Witten is one of the greatest Cowboys of all time. Drafted in the third round of the 2003 draft out of Tennessee, the 11-time Pro Bowler was a staple of the Cowboys’ offense for more than a decade. Currently, he is fourth all time with 1,152 receptions. He also is known for being one of the better blocking tight ends in the modern game. Unfortunately, he played in the era of the Cowboys that never could get over the playoff hump. Whether it be Tony Romo’s fumbled hold in Seattle, or Dez Bryant’s “drop” in Green Bay, Witten’s Cowboys traditionally have been struck by bad luck. In 2016, the Cowboys looked like they might finally get over the hump. They had two new rookies in Dak Prescott and Ezekiel Elliott, and they earned the number one seed in the NFC with 13-3 record.

Witten was still productive, and many people thought that with a new quarterback and a transcendent running back, the Cowboys could make a serious run.

Unfortunately, Aaron Rodgers and the Green Bay Packers crushed those dreams, knocking them out of the playoffs. The next year, Witten still had 63 receptions, good for seventh among tight ends, but the Cowboys struggled and did not make the playoffs.

After that 2017 season, it seemed like it was time for Witten to hang up his cleats. His role was diminishing and the Cowboys were not seriously considered as a Super Bowl contender. In 2018, the team was struggling at the beginning of the season. People were wondering if Prescott was the answer for the team, and the defense was young and inexperienced. However, the team caught fire late in the season and won the NFC East. They defeated the Seattle Seahawks in the Wild Card round before falling to the Los Angeles Rams in the Divisional Round.

Despite the loss, the Cowboys’ future is bright. It seems like Prescott will be the quarterback of the future. The offensive line is solid, Elliott is one of the best running backs in the league and the midseason acquisition of Amari Cooper looks genius. Defensively, they have one of the best front sevens in the league. Demarcus Lawrence, Leighton Vander Esch, Byron Jones and Jaylon Smith are all young and already some of the best players at their positions.

One thing the Cowboys don’t have right now is a tight end. If we see the same Jason Witten we saw in 2017, he can help fill a valuable hole for the Cowboys. Witten will help out Prescott, acting as a security blanket for the young quarterback. Plus, if the Cowboys draft a tight end, there is no better mentor than Witten. He can not be expected to be the tight end he used to be, but Witten will provide leadership and experience.

It is also rumored that Witten could possibly be the next Cowboys head coach after Jason Garrett’s contract expires, and this year playing in Dallas is simply a grooming process for him. Jerry Jones has proven to be unpredictable in his head coach hiring though, so this is only a possibility. What we do know is that one of the greatest Cowboys of all time is coming back, and he might be returning at just the right time to make a Super Bowl run.