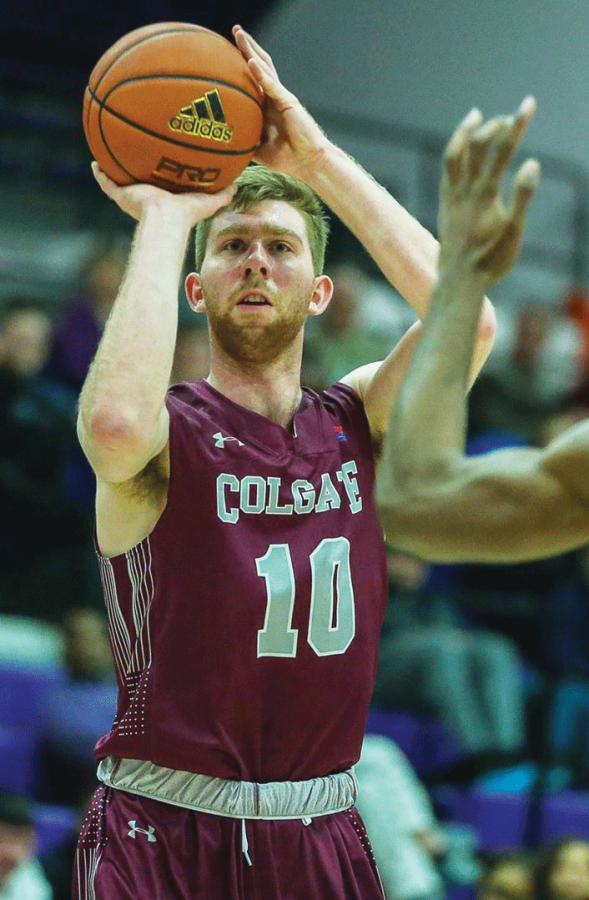 The Raiders will host the Patriot League tournament for the first time in over a decade.

On Wednesday, February 27, Colgate Men’s Basketball went for their seventh straight win as they played the Holy Cross Crusaders at home. The Raiders have been sizzling on the offensive and defensive end ever since sophomore guard Jordan Burns returned from his injury. Everything has seemed to be clicking for Colgate, and this game was no exception.

The Raiders easily routed the Crusaders with a score of 79-59. The Raiders shot the lights out from three-point territory, going 11 for 23 (48 percent). The team was led by their star junior forward Rapolas Ivanauskas, who pieced together 28 points, only missing three shots from the field. Star first-year guard, Tucker Richardson, added his usual overall contribution with ten points, four assists, four rebounds and two steals. This win was their 20th overall win of the season, breaking the team’s franchise record. The team has an opportunity to clinch the one seed if they win their next game. On a more individual note, among Colgate’s stars, Richardson and Ivanauskas, may be earning some accolades after the season winds down.

Ivanauskas is currently averaging 16.6 points per game with an additional 8.1 rebounds. He is doing this while also maintaining efficiency, shooting 52.4 percent from the field, and a whopping 45 percent from three-point territory. Ivanauskas may be considered for Player of the Year, while Richardson may be chosen for Rookie of the Year. All season he has been nothing but stellar, leading all rookies in assists and steals, while recording the second most points and rebounds even as a guard. Both of them have done exactly what Colgate needed and they both deserve it.

With a win against Lafayette on Saturday, March 2, the Raiders clinched home court throughout the Patriot League playoffs. The Raiders knew what was on the table when they traveled to Easton, Pennsylvania, going for their eighth straight win and control over the conference: if they lost and Bucknell won, then Bucknell would hold home court.

The game was a close battle that ultimately came down to the last couple minutes. In those last few minutes of the Raiders’ game, the announcer declared that Bucknell had won so it had become even more paramount for Colgate to pull out the win. It was a tie game once Dana Batt scored a la- yup to take the lead, which had the Colgate bench leaping in the air. Raiders led 68-65. Then after a three-point shot by Lafayette’s Justin Jaworski, the game was tied. Will Rayman returned the favor with a three-pointer of his own with 45 seconds left. Back and forth they went, but after Lafayette’s missed shot, Colgate ran away with the game, winning 76-70. They finished the season with 21 wins and 10 losses overall and ended 13 and 5 in conference play.

This has been a very successful season so far, but there is still a lot to prove. Colgate will either play Loyola MD or Boston University in the first round of the playoffs with a nine-game winning streak on the line. It will take place on Thursday, March 7, at Cotterell Court and is shaping up to be a huge contest. If Colgate were to win the conference tournament, then they would receive a bid to the NCAA tournament, informally known as March Madness. Currently, Joe Lunardi’s ESPN bracketology analyst has Colgate playing Virginia in the first round.