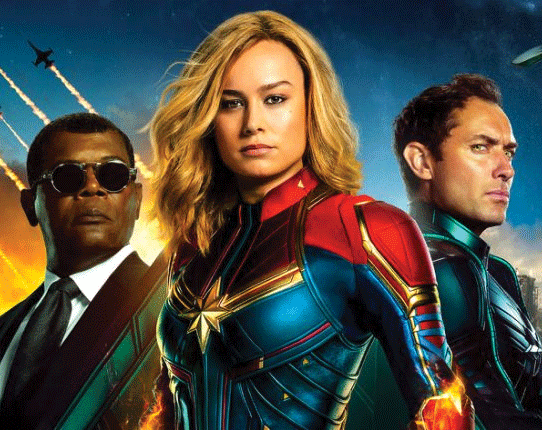 Though Marvel movies are typically greeted with excitement, this one came with backlash. “Captain Marvel” (2019) was ushered in with internet criticisms from people bothered by the fact that it is the first Marvel movie in which the titular character is a woman. However, the film is ultimately a success, as it shows a tenacious female superhero saving the world.

The story starts with our heroine Vers (Brie Larson) being trained by the Kree people. After a failed mission in subterfuge, she’s captured by one of the evil Skrulls, Talos (Ben Mendelsohn). Here, we find out that Vers is not who she thinks she is—she’s lost all memory.

While Vers’ mission makes for an interesting plot, and though Brie’s portrayal of the character is excellent, the plot’s switching from light and comedic to downright serious was jarring at times.

It also feels like there is not much character development. While we feel like Vers discovered herself and her powers by the end, she doesn’t really change as a character.

On the other hand, Jackson’s de-aged Fury makes for a fun companion in the movie. Marvel fans in the audience all cried out in joy at seeing a young Agent Coulson (Clark Gregg), and Danver’s childhood friend and ace pilot Maria (Lashana Lynch) gives us serious drama and some heartwarming moments—surprisingly enough, so does Mendelsohn’s Talos, supplying an unexpected and emotional core to a movie that doesn’t quite have one.

The plot changes a few things in Vers’ origin story with an initial flurry of information and a 90’s vintage tint that thankfully doesn’t overstay its welcome. There are some interesting twists that those familiar with Marvel (comics and movies) will catch, and the film wraps up satisfyingly; there’s nothing wrong with clichés, and the movie smartly knows that. While the dialogue is (despite Carol’s character’s whiplash) fun, the pacing seemed a little off here and there which was disorienting, making the film come across as lacking vital momentum.

Coming out just a month before “Avengers: Endgame” is a big ask for “Captain Marvel.” However, taken on its own, “Captain Marvel” is a decent movie sprinkled with a few good, maybe great moments; on the Marvel-spectrum, it ranks better than the Thor movies aside from 2018’s “Ragnarok.”

Should you watch this movie? If you’re a fan of Marvel movies, superhero movies or fun romps, then I’d recommend it. And you should probably see it if you want to really prepare for Endgame—where hopefully we’ll see more from Captain Marvel, with more justice done to her character. Beyond that? Like her powers, the sky’s the limit—or rather, the universe is the limit.