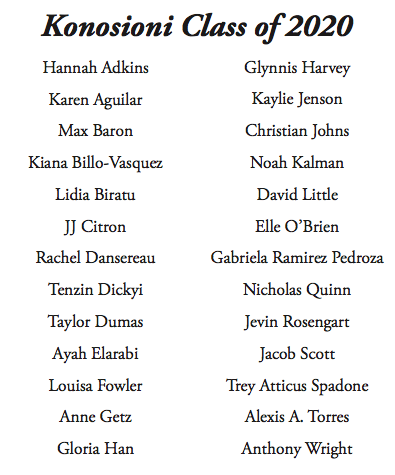 Konosioni announced the names of 26 new members of the Konosioni Senior Honor Society in an email to the campus community Tuesday, February 19.

The new members were chosen by the current members after an extensive, anonymous application process. Co-president and senior Gabby Durr said the chosen members embody Konosioni’s core tenets of leadership, service and tradition.

“We keep the application process anonymous to eliminate as much bias as possible and just focus on the applications themselves. We analyze the way each student answers our prompts. This makes decisions extremely difficult, though, because every application [is] unique and impressive in its own way,” Durr said.

Junior Glynnis Harvey said she’s excited to work with Konosioni on the very mission that attracted her to apply.

“It is an incredible honor to be chosen for Konosioni. I applied to be a part of this society because of its commitment to serving our community and I look forward to continuing its mission with the other new members,” Harvey said.

When reviewing applications, Durr said current Konosioni members look at applicants’ ideas of what makes a good leader and their ideas to improve the community rooted in campus involvement.

“It was also really important for us to build a diverse new class. Diverse in terms of identities but also in terms of what kinds of leaders and thinkers people are and what strengths they believe they hold,” Durr said.

The Konosioni Senior Honor Society formed in 1934 from two existing secret societies on Colgate’s campus, the Skull and Scroll and the Gorgon’s Head.

The new members will officially join Konosioni at an induction ceremony on Monday, February 25.

“The new class is really strong and filled with compassionate and hard working individuals. We hope that they can come together to continue their leadership on campus and strive to impact the surrounding Hamilton community,” senior Esteban Dardani said. “The coolest part about being on the other side [of this induction process] is knowing how many great things they will accomplish before they graduate.”

The induction ceremony will include a speech from the Resident Program Director of Chapel House Rodney Agnant, who was a member of Konosioni in 2014. At last year’s induction ceremony, the Outreach Coordinator for the Africana, Latin, Asian and Native American (ALANA) Cultural Center Dana Campbell delivered a speech. Campbell was a member of Konosioni in 2017.