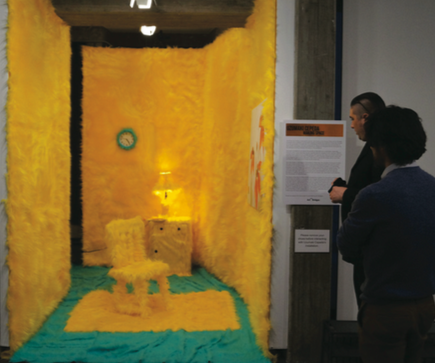 Cepeda’s work about making space for POC and the LGBTQ community will be on view in the Picker Art Gallery until March 10.

The vibe of the Picker Art Gallery on the night of February 6 was unlike anything the museum had experienced before. A small section of the gallery stood out from all the rest due to the fact that it was entirely covered in bright yellow and blue fur. The installation by artist Uzumaki Cepeda depicts a room entirely made out of fake furs; the walls, the dresser, the chair and even the clock were decorated in the brightly colored material. Guests were allowed and encouraged to remove their shoes so that they could step further into the space and interact with it. It brought out the inner child in everyone who entered; adults lounged in the chair, pet the walls and even sprawled out flat on the carpet while they smiled and laughed. Before many of the visitors showed up, even Cepeda herself was spread out on the carpet with members of the Colgate organization Sisters of the Round Table (SORT).

Cepeda’s works are about “making space” for communities whose voices are often neglected, such as people of color, women, the LGBTQ community and others. This aspect of her work is what influenced SORT to extend an invitation to Cepeda to come to Colgate as their way of celebrating the bicentennial. Like Cepeda, SORT is about creating a space for people to be heard on Colgate’s campus, where some voices can be silenced. SORT represents these voices and strives to empower women of color at Colgate.

“This year, we’re celebrating the legacy of women of color both on campus and off campus,” senior and member of SORT Tashi Sherpa said. “The reason that we [invited Cepeda] is because she creates art that is for and inspired by her own communities, and that was really big for us because we’re always looking to elevate incredible women of color.”

Sherpa contributed her own painting to the event as well, which is hanging up inside the installation.

“As we’re celebrating this bicentennial year, we had to think, ‘What does it mean? What do we want to celebrate?’” Sherpa said. “That’s how we came to our idea of celebrating women of color both on and off this campus, but specifically here because we wouldn’t be here without the women of color before us who made space for us in various ways and in the creation of institutions and programs that they are not always recognized for.”

The event also coincided with SORT’s celebration of Africana Women’s Month, which occurs from the end of February to the beginning of March. SORT brought Cepeda to campus in coordination with the Picker Art Gallery in order to illuminate the importance of their issues.

Senior Leiya Salis, who connected SORT to the Picker Art Gallery for the installation, also voiced her thoughts on the exhibition.

“This exhibition is perfect because it disrupts the formality of ‘Oh, this is an art gallery,’ and so many other systems that deny certain groups of having their art in spaces like this. I think it really disrupts that norm. It also brings out your inner child, and it’s such a fun way to decompress. It’s not just for communities of color, but people on this campus are sort of starved of this sort of space and I think it’s great that this is [here],” Salis said.

The colorful installation stands out from the harsh white walls of the Picker Art Gallery, but it also fits right in among the other exhibits (Three Acts) and represents a greater concept of inclusion not just on our campus, but across the country. Three Acts also aims to portray artists who elevate their communities to the forefront of their work and to create spaces for artists that have been overlooked by mainstream art establishments.

“SORT is an amazing community. I’m really glad I met all the girls,” Cepeda said. “They really changed my perspective on this school. They’re making space for everyone to feel included. I’m honored to be a part of that.”

Three Acts and Cepeda’s installation will be on display in the Picker Art Gallery until March 10.