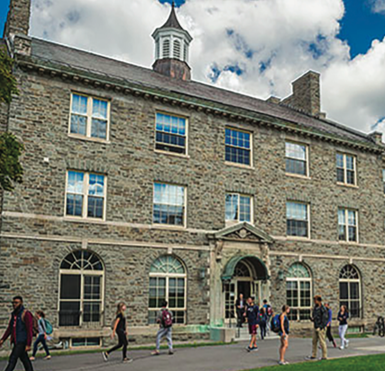 Provost and Dean of the Faculty Tracey Hucks and Vice President and Dean of the College Paul J. McLoughlin II announced an effort to prevent sexual violence at Colgate through a partnership with the Higher Education Data Sharing (HEDS) Consortium on Monday, February 4. The effort will focus on the distribution of a survey that asks about students’ experience with sexual violence on campus. The survey became available Tuesday, February 5 and will close on Sunday, February 24.

Students received a survey invitation with two links, the first of which included a set of survey questions created by HEDS. The second included a single open- ended question that offers an opportunity for students to describe how sexual violence has affected them on campus.

“We recognize that sexual violence in all forms is a major problem that must be faced with empathy and transparency in our ongoing efforts to foster a safe campus environment for all students, faculty, and staff,” Hucks and McLaughlin said.

According to Hucks and McLoughlin, the survey was last administered in 2015 and the information it collected led to the development of new resources for Colgate students such as the SANE program, Haven, the Sexual Assault Response Team and the Sexual and Intimate Partners Violence Coalition.

Participation in the survey is completely voluntary for all students, and additional opportunities for sharing personal experiences relating to sexual assault will be available.

Colgate is also providing private rooms on campus where students can choose to complete the survey. Additionally, staff members who have been trained in supporting survivors of sexual assault will be available to talk with students.

Select members of the President’s Cabinet as well as other senior administrators will open their time up for conversations with survivors who wish to speak about their experiences in a confidential setting throughout this period.

Additionally, a series of brown bag workshops and events focused on supporting survivors of sexual violence will be taking place. HA- VEN, the Women’s Studies Center, ALANA, LGBTQ+ initiatives, the Counseling Center, OUS and the Shaw Wellness Institute will participate in the organization of these events.

Hucks and McLoughlin said their goal with the survey is to “actively […] eliminate sexual violence in all forms and “effectively assess [Colgate’s] campus climate, improve [Colgate’s] prevention and education, provide necessary resources of support and ensure that [Colgate’s] response is as impactful as possible,” Director of Counseling and Psychological Services and Director of Sexual Violence Support Dawn LaFrance and University Registrar and Director of Institutional Planning, Assessment and Research Neil Albert also reached out to students regarding the HEDS Survey and associated sexual violence support events. They said they asked administrators to join them in hosting special listen- ing hours held in several locations across campus at varying times with the intention of being as accommodating to different schedules as possible.

“We are interested in hearing students’ thoughts, concerns and recommendations about this topic in person… These conversations will be used to help inform efforts to improve our community,” Albert and LaFrance said.

Albert also provided historical context regarding the HEDS Consortium and its relationship with Colgate. They said that HEDS was founded in 1983, and Colgate first joined HEDS in 1984. The group was founded to be a collaborative learning community for undergraduate-focused colleges.

“We maintain this relationship because of three resources they make available to us: sharing operational information, sharing survey data on a national survey on student engagement and for their work in creating surveys in areas of importance to their members,” Albert said.

He said these surveys have offered students the opportunity to communicate their thoughts anonymously about this difficult topic.

McLoughlin acknowledged the importance of student responses, as they will be considered holistically by the University.

“Data collected in the HEDS survey are not just numbers, they are the voices and experiences of our students. Past surveys have helped inform decisions related to strengthening support services for survivors and for funding prevention and educational programs. We anticipate using the survey results and listening sessions with similar goals in mind. We are absolutely committed to confronting the issue of sexual assault, and everyone who participates in this survey is contributing to that effort,” he said.

Colgate will donate $5 to Community Memorial Hospital for each survey response.