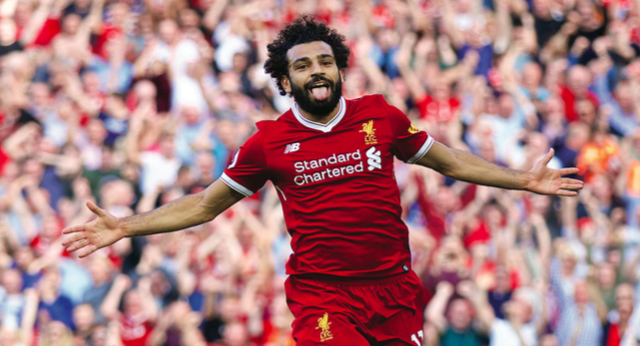 Liverpool winger Mohamed Salah (above), who leads the team in goals scored this season, will be relied upon heavily by the club and coach Jurgen Klopp as they head into UEFA Champions League play this spring.

American sports fans would tell you right now that we are in a dull, meaningless period of sports. The gap between football and baseball is far from anyone’s favorite time of year. But if you look across the Atlantic, sports fandom is at its absolute peak.

The UEFA Champions League presents us with an unorthodox concept in which we see the best soccer teams from an entire continent competing with each other. This coming week in the Champions League will definitely not disappoint.

We will see German Giants in Bayern Munich take on the Merseyside Reds, Liverpool in what should be a high flying, offensive game with Anfield at its absolute best. Both teams have themselves in a dog fight of a title race in their domestic leagues. Last year’s finalist, Liverpool, is a much improved team since their run last year. Their achilles heel, Loris Karius, was replaced by Allison Becker on a whopping $66 million that, to be quite frank, has been absolutely worth it.

Bayern Munich is a team that looks like they are going back into their typical form. Bayern was not strong in the start of the season as they dropped as low as 7th in the table. Since then they have really come back into form and have cut the title race down to just three points behind pesky and youthful Borussia Dortmund, currently in 1st place. In this game, I think Bayern will be extremely disciplined and sound, but a team with world class strikers such as Mane, Firmino and Salah is too much for anyone. I predict Liverpool pulling out a 2-1 win that send the fans home happy and Bayern going back to Munich with an away goal.

The second intriguing fixture of the Champions League is Lyon against FC Barcelona. The Catalan giants are currently leading La Liga and have looked like their usual selves throughout the season. Led by the GOAT Lionel Messi, Barcelona is poised to make a deep Champions League run and reconcile their shocking quarter final loss to AS Roma last year.

Lyon, on the other hand, finds themselves in their typical top four position in Ligue Un. They don’t really have much to play for domestically as Paris Saint Germain has a commanding 12 point lead with an additional two games in hand. I think Lyon will go into this game with a nothing to lose mentality as they are the clear underdogs. Nabil Fekir and Memphis will carry the pace and creativity for Lyon as they look to get the biggest win of their season. With Lyon being home in the first leg, I see this game being very close in the first half as both teams will come out conservatively. But ultimately I see no way that Lyon will be able to limit the firepower of Barcelona for two legs. In this game I see Barcelona winning 2-0 with two second half goals.