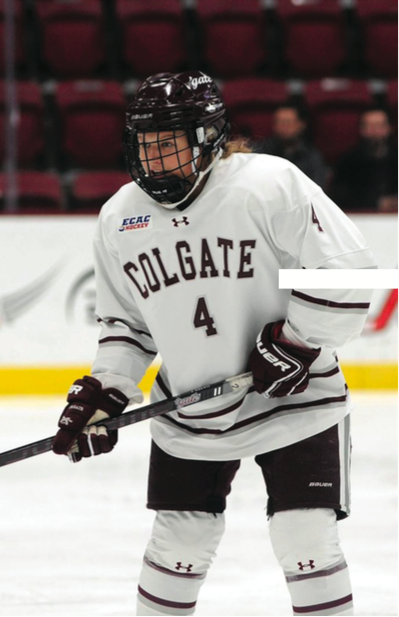 This weekend closed out the regular season for the Colgate Women’s Hockey team. Their travels to both Union College and Rensselaer Polytechnic Institute were met with success, leaving them with 2-0 for the weekend. This extension of their winning streak to five straight wins contributed to their final regular season record of 21-8-5.

On Friday, February 22 the team traveled to the Messa Rink in Schenectady, New York, home of the Dutchmen. Although Union forward Helen Markovic scored the first two goals of the game in the first period, the Raiders did not fold. With continued determination, Colgate first-year forward Malia Schneider put the Raiders on the board with just under two minutes of play remaining in the period. The goal was assisted by senior forward Shae Labbe and senior defender Olivia Zafuto.

This goal set the spark for the remainder of the game for Colgate, who tied the score only six minutes into the second period. First-year defender Tanner Gates thwarted their attempted clear and returned it for her sixth goal of the season. The unassisted goal set the scene for the remaining three unanswered goals for the Raiders.

The second period held two more goals for the Raiders, scored by Schneider and senior forward Jessie Eldridge. In the third period, Schneider scored her third and final goal of the night to seal the Colgate victory.

Following their victory on Friday, the Raiders made their way to Troy, New York, to battle the Rensselaer Puckmen at Houston Field House. Although the Puckmen were outshot 9-3 in the first period, their goalie Lovia Selander’s saves kept the score tied at zero. It wasn’t until three minutes into the second period that the first goal was scored by

Colgate’s Zafuto. The back-and-forth of the second half included goals by both Eldridge and by junior defender Caroline Ross. Entering the third period with a 3-1 score, in Colgate’s favor, Rensselaer sought a comeback. Six minutes into the period they put their second and final goal of the game into the net. To complete the Colgate victory, senior defenseman Chelsea Jacques scored 15 minutes into the period, assisted by Schneider and Gates.

The teams victorious weekend ushered in the end of the Raiders’ regular season as they enter post-season play. Head Coach Greg Fargo said the wins demonstrate the team’s growth and success over the course of the season.

“It doesn’t really matter who we play, it’s just a matter of us being ready to go on Friday and play our best hockey at the right time of the year. The results will come if you play your best,” Fargo said.

“We’re a pretty motivated group right now. We’re starting to play our best hockey and we’re where we want to be at this point, so it’s pretty exciting to be moving forward and be in this position,” Labbe said.

The Raiders are ranked third in the ECAC league and ninth overall in the NCAA. Their post-season play will begin against Harvard, who is currently ranked sixth in the ECAC league. In both of their league games this season, Colgate reigned victorious over Harvard, first with a 1-0 victory and a 4-2 road victory.