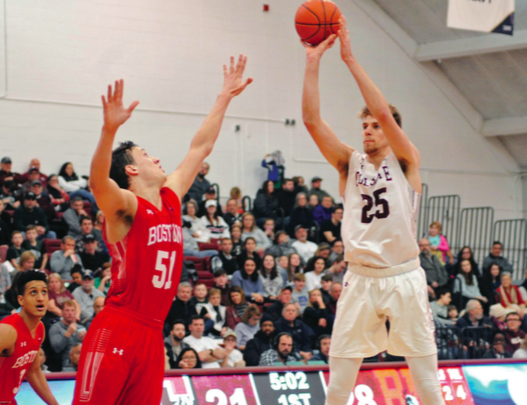 On Monday, February 4, the Raiders put on a show against the Lehigh Mountain Hawks, winning 84-62 in Bethlehem, Pennsylvania. This was one of their best showings of the year, and they needed to duplicate that effort on Saturday, February 9 against Loyola (MD). The Raiders faced off against the Loyola Greyhounds on Cotterell court with their star guard, Jordan Burns, who was returning for the first time since his injury. At the start of the game, the Raiders had no answer for Andrew Kostecka, who finished up with 18 points at halftime, demonstrating why he leads the Patriot League in scoring with 21 PPG. However, Loyola then went on a 17-2 run to close the half, and all hope looked lost until Will Rayman, the star of the game, nailed a three-pointer as time expired in the half.

As the team entered the locker room during halftime, one of the opposing players on Loyola murmured to his teammate, “We should be up 25, on these soft M———–s.” But in reality, Loyola was only up 13 at half, with the score being 48 to 35. In the locker room, assistant coach Mike Jordan used this comment to fire up the team.

It worked like a charm. The Raiders started the half the same way they finished the first, with a Rayman three. As Colgate began to gain momentum with 13 minutes left, Rayman hit a pair of threes to cut the lead to just five. At the halfway mark of the second, Rapolas Ivanauskas hit two free throws to give the Raiders a lead 58-57. Even though the Raiders had came back by so much, one of the most challenging things to do during a game is to hold onto a lead after a comeback attempt. This is because it can be challenging to sustain that level of effort for that long. But the Raiders never seemed to take their foot off the pedal.

An emphatic Ivanauskas block with 4:53 remaining had the fans on their feet as Colgate held on to just a two-point lead. Then with 1:47 remaining, senior center Dana Batt had a resounding block that went into the stands and then, on the following play, he threw down a dunk. After that, the Raiders were up two points when Andrew Kostecka, the star guard from Loyola, absorbed the contact and had an and-1 layup to give the Greyhounds a one point lead. With 18 seconds reigning Patriot League coach of the year, Matt Lengel, drew up a play that had Jordan Burns driving to the right baseline where he kicked it out to Will Rayman for the game-winning three-pointer. However, there was still plenty of time on the clock for Loyola. They drove into the paint with around five seconds left and Jack Ferguson made the defensive play of the year so far with a charging foul right inside the painted area. Then, after two clutch free throws by Ivanauskas, the Greyhounds were forced to throw up a heave from half court which came up short. Some notable performers were Will Rayman and Rapolas Ivanauskas, who each scored 24 a piece, while Jordon Burns made up for his poor shooting day (1 for 9 from the field) with 12 assists. Rayman scored those 24 points very efficiently by going 8 for 9 from the field and 6 for 6 from 3PT territory.

This win moved the Raiders to third in the Patriot League as the Greyhounds continue to tumble in the standings—all the way to ninth (out of ten teams) in the conference. I guess the Raiders were not as “soft” as the Greyhound players thought they were.