“Rashomon” Questions the Nature of Truth 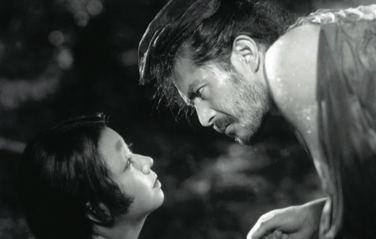 The East Asian Languages and Literatures and Film and Media Studies and departments co-sponsored the Friday Night Film Series’ screening of “Rashomon” in Golden Auditorium on February 8. The 1950 Japanese film (released in the United States in 1951) won the Golden Lion award at the Venice Film Festival in 1951 and an Academy Honorary Award for the “most outstanding foreign film” at the 1952 Academy Awards. Machiko Kyo, who plays the woman, won the Best Actress award for her role at the 1951 Mainichi Film Concours. The film is widely considered one of the greatest films ever made and led to director Akira Kurosawa’s rise to fame.

The movie follows the story of the rape of a woman and the murder of her husband, a samurai, from the perspectives of the woman, the samurai, the bandit who committed these crimes and a woodcutter who saw it happen. Labeled as a psychological thriller, the retellings of the story differ greatly from each other, making it unclear whose story is correct.

The film opens with two men, a priest and the woodcutter, sitting under the Rashomon city gate to stay out of the pouring rain. A commoner soon joins them, and they tell him about a disturbing story that they just heard. The woodcutter says he found the body of a samurai while out in the mountains and the priest saw the samurai and the woman while walking down the road. Both men were summoned to testify in court, but in the process of doing so, heard many contradictory stories, which frustrated and worried them. While the trio sit under the gate to wait for the rain to stop, the priest and woodcutter relate what they have just heard.

First, we hear the story of the bandit, Tajomaru, who claims that he led the samurai off the trail to look at a secret stash of valuable swords, tying him up and then seducing his wife in front of him despite her efforts to defend herself with a valuable dagger. The woman then asked that the two of them duel so only one man knows her shame. Tajomaru won, and she ran away.

The second story is that of the woman. She says that the bandit raped her and then ran away, and then she begged her husband to forgive her. When he only looked at her coldly, she freed him and implored him to kill her. He refused and she fell asleep, waking up to find him dead with a dagger in his chest and then she left and attempted suicide, but failed in each attempt.

Next, the dead samurai testified at the trial through a medium. He says that after the sexual assault of his wife, Tajomaru asked the woman to travel with him and she agreed, but only if he killed her husband so she doesn’t feel guilty for having revealed herself to two men. Tajomaru then grabbed her and told the husband that he could either have her killed or let her go. The samurai forgave him for that alone, but his wife fled the scene and Tajomaru attempted to capture her. He failed and let the samurai free, who kills himself.

The film returns to the three men sitting under the Rashomon gate, and while the other two men marvel at what the real story might be, the wood- cutter said that none of those accounts are true, because he saw what really happened. He admits that he didn’t tell the truth at the trial because he didn’t want to get too involved. But he saw Tajomaru beg the wife to marry him after the rape, yet she proceeded to free her husband. The bandit asked to duel for her, but the samurai said he would not fight for a ruined woman. At this juncture, the woman took charge of the situation, saying neither were real men because a real man would fight to the death for a woman’s love. They began to duel and the bandit won through a stroke of good luck, despite the samurai begging for his life on the ground. The woman turned away and Tajomaru failed to catch her, so he stole the samurai’s sword and left the scene.

The priest and commoner are shocked by this story. When they hear a baby crying and the woodcutter insists on taking it, the priest says he has lost his faith in humanity and refuses to let the woodcutter take it. The woodcutter then explains that he already has six children; taking on one more won’t make a difference and he would be happy to care for the child. Touched by his selflessness and generosity, the priest says he can now maintain his belief in the goodness of people.

Through contradictory tales, Kurosawa aims to let the truth tell itself by allowing viewers to determine what really happened.

“He’s also doing stylistically lots of new things. For example, the Rashomon effect is telling the same story from different perspectives, and that’s become a thing in a number of films… [it] has become a cinematic thing, many directors use it,” Assistant Professor of Film and Media Studies Ani Maitra said.