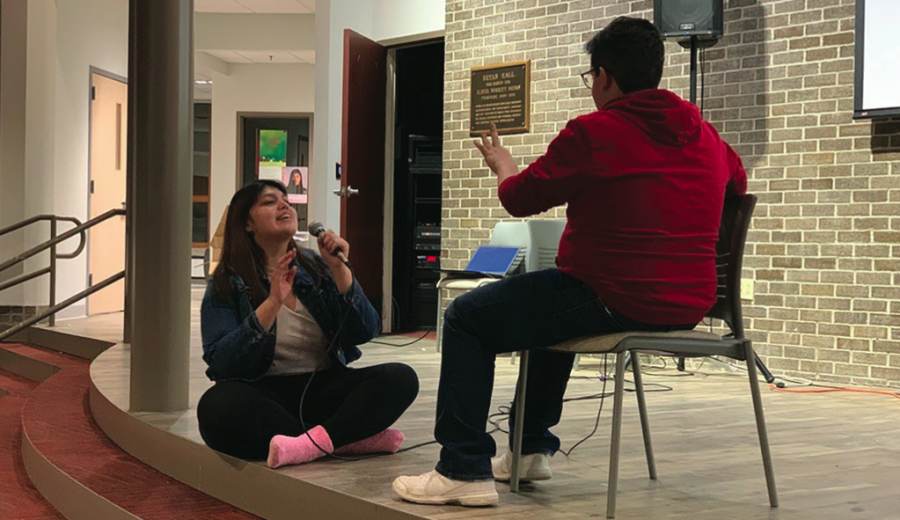 Members of the Latin American Student Organization (LASO) opened up their special club meeting on February 14 very enthusiastically; some group members gathered around the microphone in the center of the stage of the Edge Cafe while the rest of the club sat in the crowd in front of them. Everyone, not just those on stage, sang along to the song that served as the opening number, Selena’s “Bidi Bidi Bom Bom.” The room was filled with laughter and conversation as everyone ate pizza and relaxed. After the singers on stage finished their song, they opened up the microphone to everyone in attendance to sing to music specifically by Latinx artists.

Instead of their usual weekly meeting, LASO decided to host a Latinx Karaoke Night in the Edge Cafe, inviting members of the Colgate community to experience the music of their culture. They provided food from Oliveri’s and an extremely welcoming atmosphere. LASO President Alicia Carter encouraged everyone in attendance to participate in the singing.

Many members participated, singing songs from Latinx artists such as Shakira, Camila Cabello, Enrique Iglesias and even those who do not sing in Spanish, such as Cardi B and Bruno Mars. The event served as a way for the Latinx community on campus to spread their culture further than LASO and share an experience with the rest of the Colgate community.

“It’s really hard to find things that everyone has in common at Colgate because people here are from all over. Music is something that everyone can use to connect, especially Latinx as a genre. It’s just nice, wholesome fun. It brings us closer together as a community because it’s a universal language,” senior Ciara Alfaro said.

More and more Latinx artists have been breaking into the American musical scene than ever before.

“Latinx music is even more popular than country music in the United States now,” sophomore Emily Cruz said, citing a Buzzfeed article she read. “That’s huge because it’s really representative of our culture.”

The music of the night was mostly exclusive to Latinx artists, but it didn’t stop people from performing songs that were huge hits even on the American charts, such as “Havana” by Camila Cabello, “Money” by Cardi B and, in honor of Valentine’s Day, “Just the Way You Are” by Bruno Mars.

Even those in the crowd who couldn’t speak Spanish or were too nervous to perform found ways to sing along or celebrate the music and culture. Many people danced and enjoyed the company while others performed, such as sophomore Arturo Longoria, who often encouraged others to dance with him and pulled them around the room.

The infectious mood carried throughout the whole night.

“We had so much fun tonight and a lot of people showed up,” Longoria said. “We’re just trying to be out here and have fun with our culture and our songs.”

Latinx music as a movement and culture is extremely important for members of the Latinx community at Colgate.

“This is the first karaoke type event that LASO has had in the time I’ve been here,” Alfaro said.

The Mat, a new concert venue located at Parker Commons, is also striving to host diverse and exciting musicians and artists in the coming years.

“I really appreciate that Colgate has been bringing more diverse artists on campus like Oshun,” Alfaro said. “Places like The Mat are so important for us and bringing a more diverse experience to the people of Colgate.”