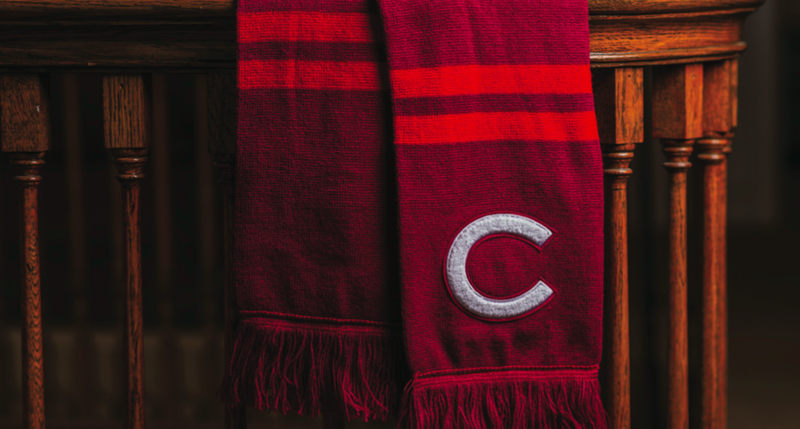 Students, faculty and staff who donate $1 on Charter Day will receive a bicentennial scarf in return.

On Tuesday, March 5, Colgate will observe Charter Day to mark two hundred years since the university was granted its charter from New York State. The celebration will be predicated on the theme of giving back to the Hamilton community.

Colgate received its charter on March 5, 1819, after 13 men contributed $1 each—totaling $13 altogether—to open the Baptist Education Society of the State of New York.

To symbolize the university’s origins, students, faculty and staff will be asked to give $1 in the Colgate Memorial Chapel, which will be open from 12:30 p.m. to 1:30 p.m. and from 5p.m. to 7p.m. The donations will be divided among three local organizations: the Hamilton Fire Department, the Hamilton Food Pantry and the Southern Madison County Volunteer Ambulance Corps (SOMAC).

“The 13 founders need not have done what they did, but they chose to create an institution and they gave resources, their prayers and their sheer will to form an institution. To be on Colgate’s campus today is to benefit from those gifts,” President Brian Casey said. “We thought that a reminder of the power of giving—even in the smallest of ways—was an important thing to do as part of the bicentennial.”

Those who donate will receive a bicentennial scarf and a cupcake as tokens of Colgate’s appreciation, the Office of Special Events said. The Bicentennial Book, which has recorded attendance at various bicentennial events this year, will also be available to sign.

For each dollar raised up to $10,000, alumnus Stephen Rock ’85 and his wife, Melissa, will donate a dollar of their own money. The Rocks, whose three daughters have attended Colgate (two are current students, one is an alumnae), own a house in Hamilton and said they consider the town their second home.

“I sat in on an information session about five years ago and I heard a professor describe how Colgate students feel like citizens of Hamilton when they leave. And that was true for me,” Rock said. “My wife and I are true believers in sharing our good fortune and encouraging others to do the same. Giving back to Hamilton is a great way to thank [the town] for making an education complete.”

Though not an annual tradition, observation of Charter Day is not new to 2019. According to Colgate’s bicentennial website, 1944, the 125th anniversary of the charter, saw special Charter Day programming.

Because many students and alumni were fighting abroad in World War II, the university worked with NBC to broadcast radio shows overseas. A highlight of the shows was President Everett Case’s reading of a letter he had received from President Franklin Roosevelt, who had been invited to speak to the Colgate community himself but was unavailable.

“The charter granted a century and a quarter ago contained a provision ‘that if the said society . . . shall at any time pass any law or regulation affecting the rights of conscience . . . the said corporation shall cease and be void,’” Roosevelt had written. “Not only your Alumni, but millions of other Americans have taken up arms in defense of those very ‘rights of conscience.’ The phrase still stands as one of the clearest and most precise expressions of things for the defense of which we and our Allies in this war are fighting.”