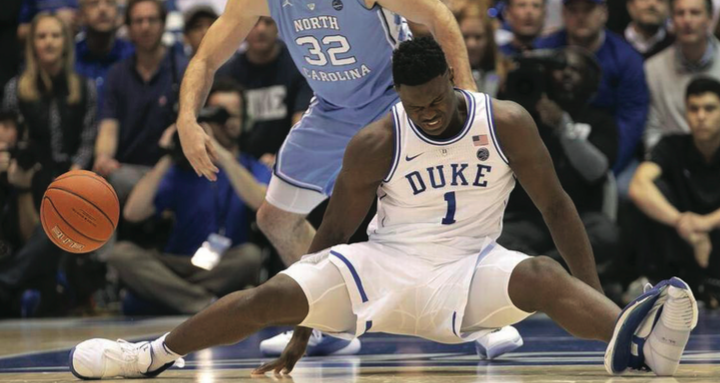 The Duke of Durham

On Wednesday, February 20, the greatest rivalry in college basketball came to a head at the Duke versus North Carolina game. With the NBA having not yet resumed after All Star Weekend, all eyes were set on this game in Durham, North Carolina. The average ticket price for the game rivaled that of the Super Bowl, and even former President Barack Obama attended the game as a fan.

However, the flow of the game immediately changed during its first possession when the favorite for National Player of the Year and likely top draft pick Zion Williamson blew through his left shoe and injured his right knee, causing him to miss the rest of the game. While UNC won an unexciting game and tests on Williamson only showed only a grade 1 knee sprain, the debate remained as to why Williamson and other talented prospects are required to play one season of college basketball before entering the NBA.

Many of those who believe he should prepare for the NBA Draft now are critical of the current one-and-done system for top basketball prospects. The NBA’s current

age minimum is 19, or one year removed from high school, so many top prospects play only one season in college before turning pro. While some current NBA players like Terrance Ferguson and Emmanuel Mudiay have avoided the NCAA to play internationally, most players choose the college route to stay in the United States and receive more national exposure.

The day after Williamson’s injury, the NBA formally proposed to the Players Association to lower the age required for draft eligibility to 18. If this proposal is successful, the limit would change starting in the 2022 NBA Draft.

I believe that this is a smart decision by the NBA. Players who are ready to enter the NBA after high school should not need to wait an extra year to do so. If base- ball and hockey prospects can turn professional after high school, there is no reason why basketball prospects should not have the same opportunity.

Many current NBA players who played one season in college are critical of the current system. Warriors center DeMarcus Cousins, who played one season at Kentucky in 2010 told the media, “Knowing what I know now, college is bull—-.” The NCAA and the universities are capitalizing on these top prospects, while none of these players actually receive any share of the profit that they generate. For example, every ACC team’s ticket prices are significantly more expensive for their game against Duke this season according to data from Vivid Seats, because of how exciting Williamson, fellow top prospect R.J. Barrett and the rest of this Duke team is. However, all of the revenue generated from ticket sales goes to the universities. Williamson won’t see a penny.