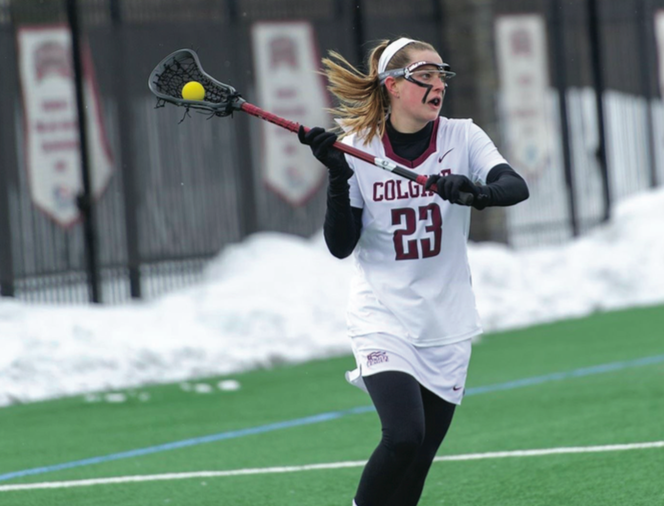 Raiders Lose to Vermont 12-9 in Hamilton

Colgate Women’s Lacrosse had their 2019 season opener at home against Vermont on Saturday, February 16 at 12 p.m. The Raiders came into their first game standing as 59th place in the D1 Women’s Lacrosse NCAA rankings after a 2018 winning season of 10-7. Vermont went into Saturday’s game off a 2018 losing season of 6-11 and ranked 94th. The Raiders played a well-fought game in the freezing weather against their East Conference opponent and were looking forward to the start of the season since their first out of season practice in the fall. Unfortunately, they were outscored by three goals by the Catamounts, losing 12-9 in their season opener.

Vermont came into the game fighting, with sophomore midfielder MacKenzie Bolt winning the first draw of the game and senior attacker Jenna Janes scoring in the first 24 seconds. They scored the following goal soon after, but the Raiders’ junior mid- fielder Noelle Patterson quickly put Colgate on the scoreboard. The game was a back and forth battle for the two teams, but Vermont remained consistently ahead of the Raiders throughout.

The Raiders outshot the Catamounts 31-24 and shot more accurately on cage 21-17. However, the Raiders could not seem to capitalize on many of their opportunities with shots going wide or getting stuffed by the goalkeeper. Senior Catamount goalie, Maddy Kuras, who saved 12 of the Raiders’ shots, proved her agility was no match for the Raiders. Kuras definitely had a stellar game, causing Colgate to have a tough time finding the back of the net.

Although Vermont led in draw controls and free-positions, Colgate outhustled them for multiple ground balls. The Raiders never lost steam in the 60 minutes of game regulation. They tirelessly fought for every 50-50 ball and took advantage of their open lanes toward the cage. The team remained composed throughout the game, varying their plays to expose open players to be fed the ball.

The first period ended with a score of 6-4 in favor of Vermont. The teams seemed well matched and neither team was entirely dominate the whole game. Vermont did a more effective job at capitalizing on their shot placement and drawing controls, but Colgate vacuumed up the majority of the ground balls and was more aggressive around the net.

Colgate’s sophomore midfielder Annelise Kotz started the wave of goals in the second period by executing off an excellent assist by first-year midfielder Jacklyn Hooey. The second period was similar to the first in that it was a back-and-forth battle of answering the opposing team. The Catamounts ended their goal-scoring streak with 6:38 left on the clock. The Raiders took advantage of the Catamounts’ lack of shooting in the final few minutes of the game and rocketed two more goals into the back of the net. The Raiders were able to decrease the gap to a final score of 12-9 Vermont.

Colgate played with a lot of heart on Saturday’s game, but unfortunately came up a few goals short of a win. The Raiders will be playing again this Saturday, February 23, at 5 p.m. against the UMass-Lowell Riverhawks.