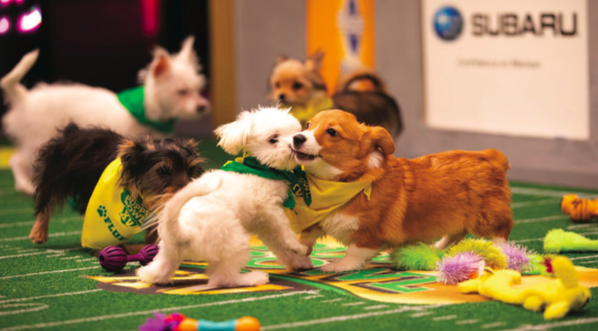 The first Sunday of February brings the most anticipated sporting event of the year. The Super Bowl, you say? No, however, it is a bowl of some sorts. Every year before the festivities of the Super Bowl begin, Animal Planet airs their “Puppy Bowl.” According to AnimalPlanet.com, the show consists of footage of a batch of puppies at play inside a model stadium, along with commentary on their actions. Puppies showcase their skills with hopes of being adopted by loving fans.

The Puppy Bowl consists of Team Ruff competing against Team Fluff in a classic showdown to see which team can score the most touchdowns. One might ask how a team scores a touchdown, knowing that a puppy cannot throw a ball. The objective is for a puppy to drag one of the multiple on-field chew toys across the finish line (on either side) for a touchdown. The team with the most touchdowns at the end of the two hour game wins the coveted “Lombarky Trophy.”

Thirty-six puppies make up the two starting lineups to try and help lead their team to victory, as 55 more puppies on the bench wait for their moment to shine. If a puppy is called for a penalty, he or she is taken out of the game and replaced by a bench puppy. Penalties include “pass inter-fur-ence” and “premature watering of the field.” If two puppies are caught fighting, they are both charged with “unnecessary ruff-ness” and taken out of the game. Timeouts are called periodically to refill the puppies’ water bowls.

This NFL season, there was a lot of heat surrounding New England Patriots’ quarterback, Tom Brady, and his age. Many thought he was too old to be a real threat in the NFL. In the Puppy Bowl, however, age is never an issue. According to Sports Illustrated, all participating puppies are within 12 and 21 weeks of age and meet certain height and weight restrictions due to the size of the stadium. Unlike many sports such as football and basketball, it pays to be smaller in the Puppy Bowl, so you can fit in the stadium.

Like the Super Bowl, the Puppy Bowl features a halftime show called “The Kitty Show.” For the thirty-minute halftime of the Puppy Bowl, kittens are brought onto the field to play with laser pointers, balls of yarn and scratching posts. The kittens have become a highly anticipated feature of the annual Puppy Bowl.

Every great championship has a most valuable player, or MVP. This year’s Puppy Bowl MVP was Bumble Bee, a deaf and blind dog who lives with a family in Spokane Valley. On Puppy Bowl Sunday, Bumble Bee became the first dog with special needs to take home the MVP trophy.

This year marked Animal Planet’s 11th annual Puppy Bowl. It was a high scoring affair with each team making great plays; Team Ruff beat Team Fluff 59-51, snapping a two-year losing streak. Team Ruff just seemed to have the upper paw from the beginning of the game, starting with Emmitt scoring the first touchdown for Team Ruff. After Emmitt’s touchdown, it seemed like Team Fluff was playing catch up for most of the game. Team Ruff’s team captain, Bennet, accepted the trophy for his team.

Keep an eye out for next year’s Puppy Bowl on Animal Planet on February 2, 2020.