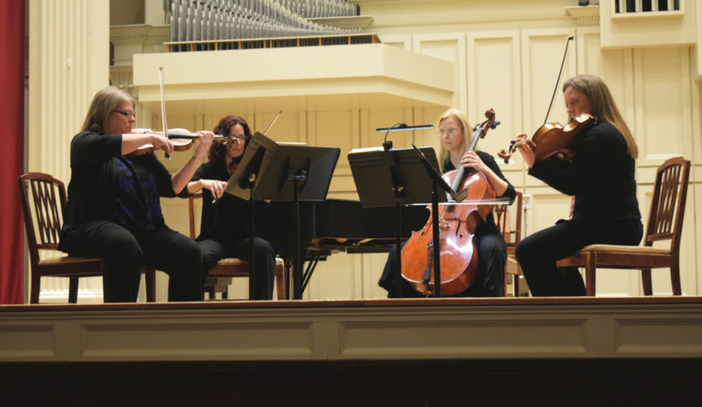 Assistant Professor of Music and Composer Ryan Chase played some of his music with members of the Society for New Music.

Assistant Professor of Music and Composer Ryan Chase showcased his new music during a faculty recital on Friday, February 8. The recital began with a cello and piano duet entitled “Riddles in Dead Tongues” (2019), which starred cellist Will Roew on the cello and Chase himself on the piano.

The composition employed a host of unusual bowing techniques and piano extended techniques to create the experience of glimpsing into an alternative realm. This piece was followed by the Society for New Music playing selections from “Songs the Monsters Sang” (2018), which continued the eerie theme. After a brief intermission, Chase continued with “The Last Winter” (2018).

“I have been trying to teach my computer to sing, so let’s see how that goes,” Chase said to introduce the piece.

The computer did not sing as a human does, but rather pulled from a host of noises and instruments to create a soundscape.

Abstract sounds could be heard such as the tapping of a large sheet of tinfoil and type-writer, a large droplet dropping into a bucket of water or more traditional stringed instruments, mixed together to create the part played by the computer.

The cellists frequently used a bowing technique called “sul ponticello” (literally, on the bridge) in “Riddles in Dead Tongues,” which was intended to continue the eerie theme of the music, complemented by the piano line.

In the second movement, Roew changed bows to play “col legno,” or using the back of the bow. The second movement was much more syncopated and the cello played shorter, staccato notes with eclectic energy. The hesitations and syncopations instilled the feeling that the audience was an observer in a different world.

The third movement was the only movement in which there was a clear melody line. While Chase danced across the keys in arcing melody, Roew accompanied with long, moaning vibrato.

The following movement featured sounds on the cello and piano melodies different from the earlier movements and end- ed abruptly with a deceptive cadence directly in the middle of a repeated segment.

The fifth, sixth and seventh cadence offered familiar musical elements then ending abruptly or mutating a long cello bow to screech. These elements enforced the idea of otherworldliness evoked in the title. The string quartet piece, “Songs the Monsters Sang,” began with all four Society for New Music instrumentalists, Ann McIntyre on violin, Noemi Miloradovic on violin, Arvilla Wendland on viola and Ruth Berry on the cello.

The second movement featured high, bird-call like trills and ended with all four instruments sliding upwards and then stopping. The third movement was more upbeat and reminiscent of a folk song.

The fourth movement sounded like it was being played underwater. The fifth movement had a strong duple feel but still managed to sustain frenetic energy.

The sixth movement was very quick and had a triplet feel. This movement began with each instrument playing very different melodies and just as they began to align with each other the movement ended.

Senior Eli Bergen said he was roped into the songs.

“Chase is really good at developing a melody that your ear wants to catch onto and then giving it to you,” Bergen said.

The computer and piano piece, “The Last Winter”, wrapped up the evening.