Who’s Hot and Who’s Not in the NHL 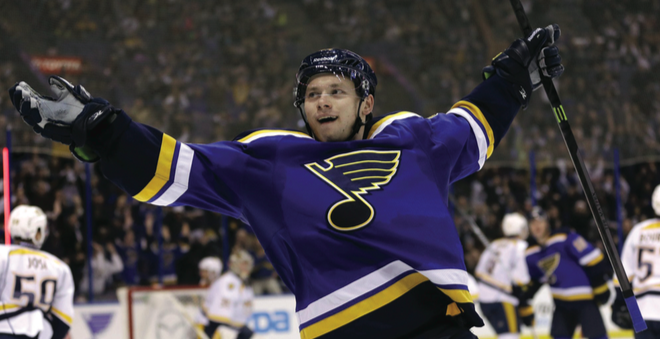 Anything but Blues in St. Louis

With two months remaining in the NHL season, teams are looking to make their final push for a spot in the Stanley Cup Playoffs. Some teams are heading in the right direction and have strung together some solid winning streaks, while others are quickly falling out of the playoff race.

The St. Louis Blues have battled their way from the bottom of the league to the final Wild Card spot in the Western Conference. The Blues have picked up 15 out of a possible 20 points in their last 10 games. The Blues have won six straight games, two of which came in back-to-back games against the Nashville Predators, who have been at the top of the Central Division for most of the season. The Blues’ leading scorer, Vladimir Tarasenko, recorded a hat trick on February 10 in the Blues’ game against Nashville. The Blues went on to win the game 5-4 in overtime thanks to Tarasenko’s overtime winner. Tarasenko has recorded at least 20 goals in six straight seasons.

The Philadelphia Flyers are 9-0-1 in their last ten games. A lot of the Flyers’ success can be attributed to their goaltending. Rookie goaltender Carter Hart has made many impressive, timely saves during the Flyers’ run. The 6’2″, 20-year-old goaltender helped lead Team Canada to a World Juniors champion- ship last year. This season, Hart has recorded 11 wins for an overall record of 11-5-1, allowing an average of 2.45 goals against with a .926 save percentage. Anthony Stolarz has also come up big for the Flyers during their ten-game point streak.

The Anaheim Ducks have lost their last seven games in a row and are 2-8-0 in their last ten games. During their seven game losing streak, the Ducks have been outscored 37- 8, getting shut out in two of the seven games. Their worst loss during their losing streak was on February 2 against the Winnipeg Jets. Despite scoring three goals on 29 shots and limiting the Jets to 31 shots, the Ducks allowed nine goals and dropped the game 9-3. The Ducks have dropped out of the Wildcard position and fallen to last place in the Western Conference.

The New Jersey Devils may be the most unpredictable team in the NHL for the past five years. It seems the Devils are making the playoffs one year and drafting a top five prospect the next. The Devils are 3-6-1 in their last ten games. While special teams have not been an issue for the devils, faceoff percentage has been one of their biggest problems this season. The Devils are currently the fifth worst faceoff team in the league, which has affected their offensive possession time. Goal differential has also been an issue for New Jersey, as they have a -27 goal differential. In their last two wins, the Devils have only beaten their opponent by one goal. The Devils may be looking at a lottery draft pick this offseason if they do not pick up their game.