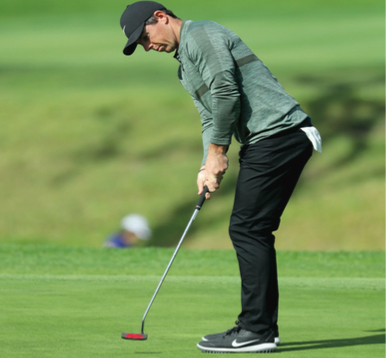 Each year, the Genesis Open, formerly known as the Northern Trust Open, signals the conclusion of the PGA Tour’s “West Coast Swing” before the schedule of events shifts to Florida. As one of the more significant tournaments in the early calendar year, the Genesis Open tends to attract a talented field to the Riviera Country Club in Pacific Palisades, California, featuring some of golf ’s biggest names. In prior seasons, Riviera has been the location of some incredible performances, including Dustin Johnson’s five-stroke victory in 2017, when he finished the weekend at -17, the lowest score to par since 1990.

This year’s tournament was different though, as rain delays and brutal weather conditions halted play at multiple points throughout the first two rounds. The golfers pushed through and managed to finish the four rounds in time to still end on Sunday. J.B. Holmes won the tournament outright by a one-stroke margin, finishing at -14. Though Holmes may have come away with the victory at Riviera, a couple other storylines dominated a majority of the tournament’s coverage this past weekend.

One such storyline involved Jordan Spieth. A three-time major champion, Spieth has definitely proven that he has what it takes to compete at the highest level in golf. However, ever since his historic choke in the 2016 Masters Tournament, Spieth has just not looked like himself. His major victories were not simply lucky, because Spieth has clearly shown that he is one of the top golfers in the world. That being said, I think that his Masters meltdown may have triggered something within him because, since then, Spieth has seemed to have a lot of trouble playing well on Sundays and closing out events.

This narrative held true at Riviera this past weekend. Spieth had finished under par in each of the first three rounds and entered the final round at -9, which put him in contention heading into Sunday’s play. However, Spieth simply could not find any sort of rhythm, ultimately finishing with an 81. This final-round catastrophe dropped Spieth all the way down to 51st on the final leaderboard with a final to par score of +1.

This is obviously one of the very early tournaments of the season, and Spieth has plenty of time to right the ship between now and the summer. That being said, this developing trend of Spieth’s inability to effectively finish in the fourth round of tournaments is starting to become worrisome. Hopefully Spieth can turn things around and get back to his former major-winning self, but his lackluster finish at Riviera does not bode well for the upcoming events this spring.

Another surprise this past weekend was Tiger Woods’ impressive play. Over the past year or so, Woods has been the subject of much discussion and scrutiny by fans and analysts. Following his very public infidelity scandal in 2009, as well as various injuries, the golf world wondered whether or not Woods would ever be able to return to his unprecedentedly dominant form. After all, Woods was once the best golfer on the planet, so a true return to glory for him would be a huge step for the game of golf.

Woods was quietly consistent through the first two rounds of the Genesis Open. He followed bogeys with birdies and eventually finished the second round standing at -1. Then, in the third round of the tournament, Woods really stepped up his game. With a pair of eagles, three birdies and just one bogey throughout the entire 18 holes, Woods managed to gain a lot of ground on the leaderboard, ultimately entering the clubhouse with a six-under 65 round.

Though Woods’ fourth and final round was a bit rocky, many analysts and fans believe that his stellar play in the third round proves that he still has what it takes to compete at the highest level. Woods finished the tournament at -6, tied for 15th place. This result was obviously not what he was hoping for, but Woods now has some momentum to build upon in the coming weeks leading up to the Masters starting on April 11.

Like Spieth, if Woods can just get over his psychological hurdles, then he may be able to return to his former style of play and contend for major victories like he once did.

A third takeaway from the Genesis Open is Rory McIlroy’s hot start to the 2019 season. After an underwhelming score of +1 after the first round, McIlroy came out firing in the final three rounds of play, scoring under par in each round and ultimately finishing the weekend at -11.

McIlroy’s fourth place finish was quite impressive, especially considering the fact that he is coming off of a lackluster season last summer. Having already won the U.S. Open, the Open Championship and the PGA Championship, McIlroy only needs a Masters victory to secure the fabled golf grand slam.

Since he turned pro in 2007, McIlroy has never had overwhelming success at the Masters, as his best finish was only fourth place at the 2015 tournament. Still, McIlroy’s impressive performance at Riviera this past weekend sets him up for a season of success this year.

Hopefully, McIlroy will be able to ride the momentum he gained from the Genesis Open. If he can continue to improve and hit the ball as well as he did last weekend, then McIlroy should have as good a shot as anyone to finally capture that elusive green jacket.

This year’s Genesis Open brought with it plenty of ups and downs. Though players had to battle unpredictable weather conditions and less-than-ideal course conditions, the tournament still provided a platform for some exceptional golf. More than anything else, though, this tournament and other early-season events will serve as previews for how some of the world’s top golfers, including Spieth, Woods and McIlroy, may play in tournaments and majors this summer.