Men’s Lacrosse Falls to No. 3 Maryland 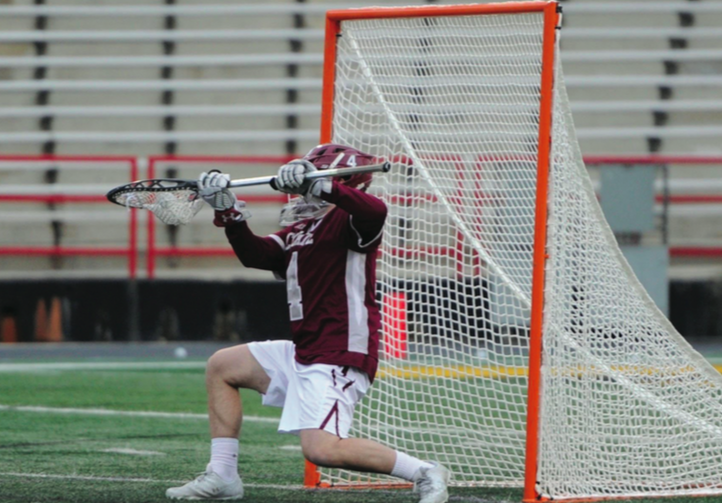 The Colgate Men’s Lacrosse team faced No. 3 Maryland on Tuesday night, February 20 at College Park and fell 11-6. This loss, however, does not diminish the Raiders’ early successes this season under new Head Coach Matt Karweck. The No. 16 Raiders opened up the season with two incredible victories, including a monumental 12-9 win over Syracuse and a strong showing against Binghamton that saw a 16-10 victory.

The first 10 minutes of game were scoreless until Maryland went on a run and put up four goals in the last 4:40 of the quarter. Colgate responded in the second quarter, scoring three times. Sophomore attacker Mike Hawkins put up two goals for the Raiders, recording his first two goals of the season. Junior attacker Griffin Brown also scored a goal for the Raiders, his fifth goal of the season. Despite these strong offensive sets from Colgate, Maryland kept a strong lead, going into halftime up 9-3.

Petkevich’s goal made him the leading scorer for the Raiders, with nine goals altogether, matching his total goals recorded from all of last season.

On the defensive end, senior goalkeeper, Connor Mullen reached a season-high of 13 saves. His outstanding play in the cage helped keep the Raiders tight in the game until the final whistle. This game puts Colgate at a record of 2-1, as the Terps remain undefeated at 4-0.

“We’re going to learn so much of what it takes to be great, and that’s going to prepare us well for the Patriot League. If these three games make us better for the league, then we accomplished the mission. And I know our guys have that mindset,” Karweck said.

“We started the game a lot slower than we wanted to on both sides of the field. Maryland is a really good team and it was good to battle back in the second half,” senior midfielder Danny Healey said. “It was not the final result we were looking for, but it was a great game to build off of and learn from for our upcoming Patriot League games.”

“The Terps were a really great team and we are glad to have had the opportunity to play them and face competition at the next level,” Williams said, looking ahead to their next game. “We are taking this week at practice to fix our mistakes and come out with a big win against our first Patriot League opponent Lehigh.”

Colgate is off this weekend and is taking the time to prepare for their next game against Lehigh. Their game against Hobart has been moved to Tuesday March 5 at 4 p.m. at Crown Field. Lehigh is currently 1-2, with a 15-8 win against the New Jersey Institute of Technology, a 3-4 loss to Hofstra and an 8-11 loss to Virginia. The Raiders face a tough match up and are ex- cited to start off Patriot League play on a strong note. Be sure to get out and watch your Raiders!