The Colgate Thirteen, Will You Be My Valentine? 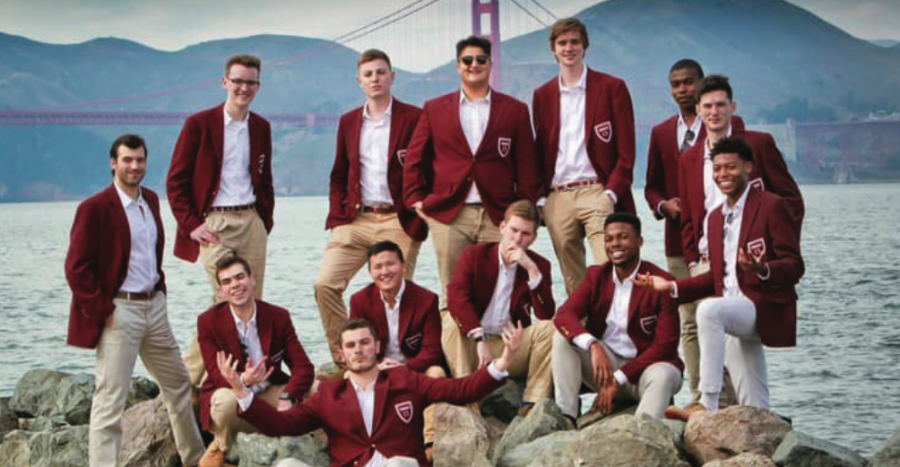 Led by current senior Drew O’Hara, the Colgate Thirteen’s Valentine’s Day performance on Wednesday, February 13 featured a healthy balance of singing, dancing and comedic interludes. Clad in various shades of maroon and pink, the group opened the show with a charming rendition of Alicia Keys’ “If I Ain’t Got You.” The love ballad theme was solidified with performances of Andy Grammer’s “Fine by Me” and Frank Ocean’s “Thinkin’ Bout You,” among other romantic songs.

The night featured ten songs in total, each soloed by a different member of The Thirteen. Though stylistically parallel to their annual performances in the Chapel, Wednesday evening’s COOP venue allowed for increased interaction between the group’s audience and its outgoing members. This distinction was clear as soon as freshman Ryan Ruhl emerged in a Cupid costume, tossing candy at onlookers just in time to lend his vocals to the second half of the night’s performances. This was especially impressive considering that he confidently finished the concert even though his costume which was nothing more than a sheet fastened as a diaper along with a clothes hanger as an arrow.

While the surprising appearance of Cupid was definitely a highlight, the unique dynamic between onlookers and The Thirteen was unique and engaging. It was reinforced in more subtle ways encouraged by the absence of a formal stage, which put the singers and audience on the same level. Senior Esteban Dardani invited junior Glynnis Harvey onstage to dance during a rendition of the Expression’s “Baby Come Back to Me,” and there were several occasions where witty banter ensued between performers and the friends who came to cheer them on.

Another surprise came in the setlist itself. After Dardani’s wholesome performance of a love ballad, the group followed up with a jarring song from the 1950s, “The Masochism Tango.” This performance had the audience roaring with laughter, brought on not only by the song’s content but also by the fully choreographed dance the group had arranged. The singers are obviously a close-knit group who like to have fun with their performances and improvise on stage. This landed extremely well with the audience.

Though seating was originally partitioned in five rows, late arrivals pulled in additional chairs and by the end of the night audience members were occupying tables in the fireplace room, showcasing the popularity of the night’s event.

First-year audience member Evie Unger remarked that she attended the concert to support her friends. Given that a majority of the crowd lingered after the show ended to offer congratulations, Unger’s reaction is indicative of the enthusiastic mood of the crowd and the personal relationships many attendees had with the Thirteen.

“The concert was super enjoyable, very uplifting, Valentine’s-y and funny,” Unger said. The Thirteen closed the show with a mashup of two Marvin Gaye classics: “Let’s Get It On” and “Sexual Healing.” The energy brought to this song left an electricity in the room at the end of the show.