In the Light: Ciara Alfaro 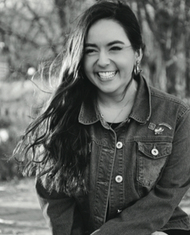 Originally from Texas, senior Ciara Alfaro journeyed a long way to get to Colgate. As a first generation college student, Alfaro had the responsibility of navigating her way through the college process largely by herself. However, despite her initial unfamiliarity, she has found a community and school that she loves.

Initially intending to pursue a pre-med track, Alfaro quickly realized it was not for her and instead decided to pursue a passion she had loved since high school: writing. She was involved in journalism in high school, and after taking English classes at Colgate, she decided to commit. Alfaro is now a Creative Writing and Women’s Studies double concentrator. She says that the Women’s Studies portion of her concentration came somewhat unintentionally. The classes that interested her happened to fulfill the major requirements, and she decided to declare.

Alfaro considers many Colgate professors to be sources of inspiration for her. She admires them for creating a community for writers on campus and for understanding that students have as much to teach as professors do. Currently, Alfaro wants to become a professor, preferably of English, delving into Chicana or Latinx literature or writing.

Alfaro is working on a project that aims to bridge the gap between indigenous and Latinx people. She notices a lot of missed connections between these groups. Through her project, she hopes to create a space where students and faculty can submit work and find community.

“I think it could be beneficial for healing, and recognizing one another and that we have similar struggles,” Alfaro said.

Another project Alfaro is working on is a collection of essays about family, intergenerational trauma, models of toxic masculinity and femininity and even ghosts. She says that while it can be hard delving deeply into the more uncomfortable histories of family, it is therapeutic to reflect.

Alfaro has already had some of her work published in publications such as K’in Literary Journal, Green Briar Review and more.

On campus, Alfaro is a Community Leader, a board member of the Latin American Student Organization (LASO), a Konosioni Senior Honor Society member and a staff member of The Colgate Portfolio. She has found welcoming communities in these organizations, especially her involvement in LASO.

“Something that I’ve really struggled with at Colgate is being half white and half Mexican and what that means for me,” Alfaro said. “But then in my junior year I realized I am entitled to that space and I do belong there.”

She and her fellow LASO board members do their best to be aware of everyone’s identities and help everyone feel like they belong.