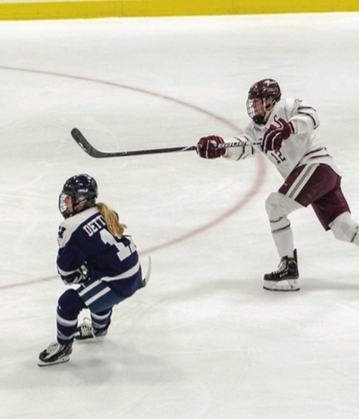 Jack Breitowich, Maroon-News Staff
The Colgate Women’s Ice Hockey team went to work this weekend for their last home games of the regular season on February 15 and 16. After a huge overtime win over the defending national champions, Clarkson University, last week, the Raiders were looking for another big weekend, and they got it.

The Raiders played Friday night, February 15, against the Yale University Bulldogs. Despite letting up one goal eight minutes into the game, the Raiders were not deterred. One minute after Yale scored the game’s first goal, Colgate tied the game up. Senior forward Shae Labbe scored for the Raiders with assists coming from sophomore forward Malia Schneider and senior forward Jessie Eldridge.

Five minutes after the Raiders tied the game, Eldridge recorded her first goal of the night to put the Raiders up one. Labbe and junior defender Caroline Ross assisted on Eldridge’s goal. The Raiders ended the first period leading the Bulldogs 2-1 on home ice.

Yale was quick to strike in the second period, tying the game at two goals two minutes in. The game remained locked for most of the second period. However, with five minutes left, sophomore defender Shelby Wood found the back of the net for the Raiders with assists from senior defender Olivia Zafuto and Schneider.

With two minutes left in the second period, the Raiders were awarded a power play, looking to double their lead. Zafuto managed to find the back of the net after a passing play by first-year forward Delani Mackay and Labbe. The Raiders entered the third period leading 4-2.

Yale managed to score their third goal five minutes after the Raiders went up three goals. However, with four minutes remaining in the game, Larson scored her second goal of the game on the power play. First-year forward Eleri Mackay picked up an assist on Larson’s second goal, and Shae Labbe recorded her second assist for the night and her third point of the day.

The Raiders ended the game with a 6-3 victory over the Bulldogs. The Raiders had also swept Yale during this year’s regular season, beating them back in November 5-2.

The seniors were the story on Saturday, February 16, for Colgate’s game against Brown University. The Raiders celebrated their Senior Night as it was the seniors’ final game on home ice for the regular season.

The seniors wasted no time getting on the board against Brown, with Labbe scoring one minute into the game with an assist from Eldridge.

Ten minutes after the first goal of the game, Larson scored to double the Colgate lead with assists from Labbe and Larose. The Raiders ended the first period leading the Brown Bears 2-0.

Larose scored four minutes into the second period to add to the Colgate lead.

Larose’s goal was unassisted. Brown had some work to do, entering the third period down 3-0.

One minute into the third period, first-year forward Eleri Mackay put the Raiders up 4-0 with assists from Zafuto and Ross.

In her final home ice game of her Colgate career, Julia Vandyk recorded a shutout in the Raiders’ 4-0 win over Brown University.