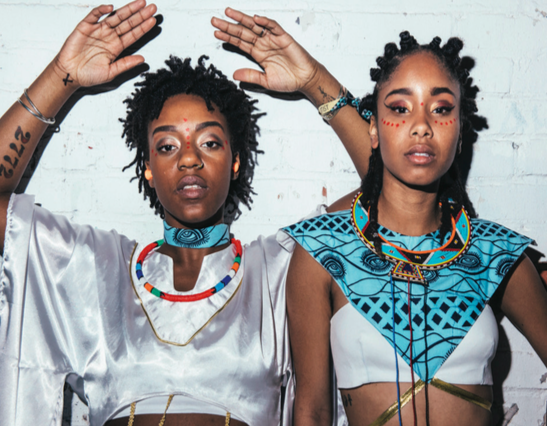 Colgate students living both up and down the hill journeyed through the cold to see the hip-hop and soul duo Oshun play at The Mat on Thursday, February 14. This was the first show of Oshun’s Bittersweet Tour, named after their 2018 album.

Oshun is gaining a large following since dropping their first single, “Sango,” four years ago. The Brooklyn-based pair has amassed almost 170,000 monthly listeners on Spotify. Among the listeners are several Colgate students who went to The Mat specifically to see the group perform. Other student attendees were just excited to see a concert on campus.

The Mat, the new concert series at Parker Commons, is working to bring diverse talent to campus. This is the second of six concerts they will host this semester. Although the project only began last August, the students and staff involved in the project have already put in a lot of work to make the space one that students enjoy. They even gave away free shirts, hats and card holders to those who arrived early.

The doors opened at 8 p.m., an hour before the music started. During this time, students socialized at tables decorated in white cloths, eating from the free buffet. Upperclassmen seemed especially excited about the free pizza, popcorn, pretzels, fruit and chocolate. A bar with alcoholic drinks was also open to those over 21.

Once the performance started, the audience migrated out of their seats and into the open space in front of the stage to start dancing. The duo ushered everyone in, asking them to come closer to the stage, creating an intimate setting. They started with covers of popular songs from Cardi B, Beyonce and Sean Paul, but reformed them to fit their own style. Then they mainly featured songs from their album “Bittersweet” mixed with some songs from previous albums.

Several of their originals explore Afrofuturism, a philosophy of science and history that considers the way African Diaspora culture crosses with technological elements. Throughout the concert, Oshun emphasized the importance of self love in our ability to manifest the things we want to happen in our lives.

“All it takes is self worth. Talking to yourself, visualizing the things that you want to manifest,” the duo said.

The duo then involved the audience in an exercise in manifesting their hopes into existence by instructing everyone to wrap their arms around themselves. This interlude complemented their songs which revolved around spiritual peace and self love. Audience members seemed receptive to this energy, and even mirrored Oshun’s dance movements in exact time during a few songs.

After their set was over, Oshun urged all of the students in attendance to keep pushing themselves to be successful in school and reach their goals. The women in the duo recalled how dedicated they had to be in pursuing their music while they were in college. Two years ago, they graduated and wrote a song called “Graduate.” Oshun played this song as an encore and had the audience singing along to the chorus by the end.

By the time the show ended, the duo had certainly gained new fans, as evidenced by the many students who bought Os- hun apparel from a booth in the back of the venue. The success of this concert demonstrates student interest in seeing music on campus, and shows promise for the future of The Mat.