Cece Winans “Lets Them Fall in Love” at Gospel Fest 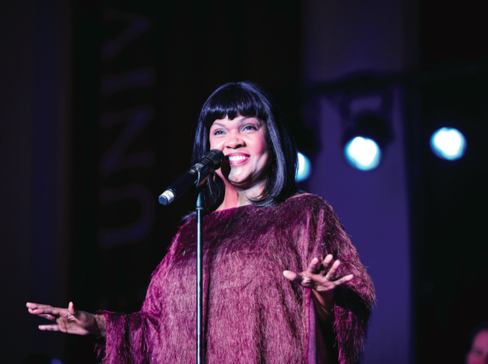 Gospel Fest began at 7 p.m. in the Colgate Memorial Chapel, with additional overflow locations available around campus due to the immense popularity of the annual event. The free concert was open to the public and was also accessible online via Colgate’s Livestream platform.

After introductory remarks given by Corey MacPherson, the University Chaplain and Protestant Campus minister, Jazmyn McKoy ’17 opened the show with a solo performance of “Keep the Dream Alive.” The University Chamber Singers also gave performances of “Abide by Me” and “Soon-Ah Will Be Done.”

Dr. Walt Whitman, a longtime friend of the university and renowned musician, took the stage next. Whitman is the president and CEO of the Soul Children of Chicago, the oldest, internationally acclaimed, Grammy Award-winning youth gospel in the nation. Upon his arrival on stage, Whitman expressed his love for Colgate and said he was particularly excited to perform this bicentennial year.

“Anything that’s 200 years old deserves celebration,” Whitman said. For Gospel Fest 2019, Whitman held an open casting call for any students, faculty or staff members interested in joining a gospel choir. The result was the Colgate Sojourners’ Gospel Choir, or as Whitman described, the “Colgate Soul Children.”

“Sojourners loves putting on Gospel Fest every year. It is an opportunity for us not only to sing gospel music but also for us to share our love of gospel with the community,” president of the choir and senior Marielle Scheffers said. “We understand that not everyone on the Colgate campus has been exposed to gospel previously, and Gospel Fest is a fun opportunity for everyone to see award-winning gospel artists even while at school in central New York.”

The “Colgate Soul Children” had only three hours of rehearsal the night before their performance. Together, they sang renditions of “Lift Him Up” and “Jesus is Right Here.”

“It’s always a blast to work under Dr. Walt Whitman’s direction. It’s amazing to see how he can take a group of people who have never performed together before and three hours later end up with a cohesive chorus complete with choreography,” senior Brianna Delaney, who participated in the choir, said.

After the opening performances, Cece Winans took the stage. Winans, born in 1964 in Detroit, has won 12 Grammy Awards and sold over 12 million albums worldwide, making her the best-selling female gospel artist of all time. Winans has a strong personal connection to the Christian faith and credits the influence of God for her successes in her music career and personal life. Opening with the popular “Hallelujah Praise (The Highest Praise),” Winans continued her set with selections from her Grammy Award- winning 2017 album “Let Them Fall In Love,” including “Lowly,” “Hey Devil!,” “Why Me” and “He’s Never Failed Me Yet.”

For the final number of Gospel Fest, Winans invited everyone who participated in the show back onto the stage for a joint performance of

“Dancing in the Spirit.” “Appearing on the same stage with Cece Winans was certainly an experience I’ll never forget. Even after the performance, she was so gracious about taking photos with student performers and joining us in prayer,” Delaney said.

First-year Sam Brotmann was impressed with the performance.

“It was exciting to see extremely talented Colgate students share the same stage as a 12-time Grammy winning artist for the night, and I think all of us in the audience were proud to see the unique display of religion and culture,” Brotmann said.

MacPherson said he was happy with how Gospel Fest turned out.

“The highlight of the night for me was watching Sojourners Gospel Choir and seeing the smiles on their faces as they performed under the direction of Dr. Walt Whitman. The tradition of Sojourners singing the final song of the night with the guest artist is always a great way to conclude Gospel Fest,” MacPherson said.