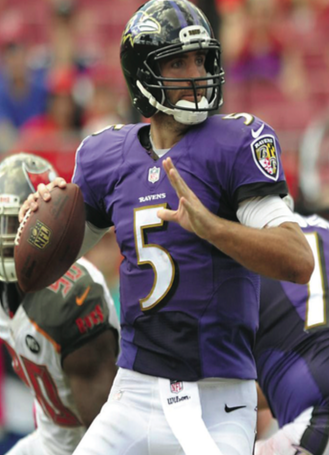 The Denver Broncos signed up for another year of mediocrity when General Manager John Elway sent a mid-round draft pick to the Baltimore Ravens in exchange for veteran quarterback Joe Flacco. Since winning the Super Bowl in 2015, the Broncos have gone from being one of the superpowers of the league to perennial underwhelmers, failing to reach the playoffs in three straight seasons.

The Broncos were able to ride average quarterback play from Brock Osweiler and a 39-year-old Peyton Manning to a Super Bowl ring in 2015, but much of that success can be attributed to one of the best defenses in recent memory. Elway seems stuck in the past, as he has used the same blueprint to assemble Denver’s roster ever since: investing money and draft picks on defense and relying on a combination of Case Keenum, Trevor Siemian, Osweiler and Paxton Lynch to play quarterback. While the Broncos still have a respectable defense, they desperately need an upgrade at quarterback to even be considered a playoff contender. Joe Flacco is far from the answer.

A Super Bowl winner with the Ravens in 2012, Flacco was once the topic of heated debates on whether he could be considered an elite NFL quarterback. Those days are long gone, as Flacco has regressed with age and is nothing more than painfully average. He hasn’t won ten games in a single season since 2014 and was made expendable in Baltimore after going 4-5 last year, eventually being replaced by rookie Lamar Jackson.

Flacco arguably offers a marginal upgrade for the Broncos, as he has a stronger arm and a better playoff record than current starter Case Keenum. However, nothing indicates that Flacco will improve his performance in Denver. He could not win even with the help of Baltimore’s excellent defense and strong running game, the exact same strengths that the Broncos have. To make matters worse, Flacco’s stats over the past three years are almost a mirror image to Keenum’s. Both players have made 41 starts, thrown for a 63.8 completion percentage and tossed almost exactly the same number of touchdowns and interceptions (Flacco had 50 touchdowns and 34 interceptions, Keenum had 49 touchdowns and 33 interceptions). Elway essentially gave up draft picks for a player he already had under contract.

Additionally, Denver simply does not have the same weapons on offense that it has had in recent years. Rookie running back Philip Lind- say was impressive this past season, but Flacco will not have as much help on passing downs. With several wide receivers either coming off injuries or set to retire within a year or two, Flacco’s options are dwindling, so it will be interesting to see whether or not Elway decides to bring in new targets via either free agency or the upcoming NFL Draft. As for right now, though, the prospects for Denver’s offense this season are quite dull.

By adding an over-the-hill veteran in Joe Flacco to the roster, John Elway is putting a band-aid on a bullet hole, refusing to acknowledge that Denver needs a drastic change at quarterback rather than more of the same. It is possible that Elway did not like what he saw in this year’s crop of quarterbacks in the draft and decided to play for a high pick next year. Still, it is hard to argue that Kyler Murray, Dwayne Haskins or another rookie quarterback wouldn’t make the Broncos’ future brighter. There is still time for Elway to right the ship and select a quarterback in the 2019 NFL Draft, but for now, the Broncos seem doomed to another underwhelming season.