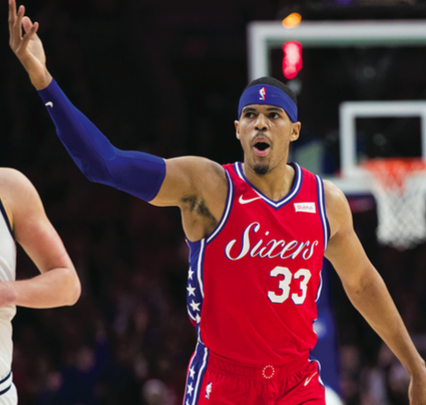 Tobias Harris was recently acquired by the 76ers from the Los Angeles Clippers and could give Philly the spark it needs to make a deep playoff run this year.

For the past eight seasons, LeBron James has owned the NBA’s Eastern Conference, as he led the Miami Heat and Cleveland Cavaliers to a combined eight NBA Finals trips since 2011.

With James joining the L.A. Lakers this season, several other strong teams have emerged toward the top of the conference, and there is no overwhelming favorite. With James gone, the Eastern Conference is wide open this season. Many teams and players have shown signs of taking over, but a new true King of the East has not yet been crowned.

That being said, there are five teams that I truly believe have a shot at winning the conference. A change is coming in the Eastern Conference, and it will be very exciting to witness how these five teams will battle it out for the title as the season winds down. With that, let us get into the five contenders.

The Bucks have made the jump from the fringes of playoff contention all the way to the top record in the NBA. With the addition of 2015 Coach of the Year Mike Budenholzer, the Bucks have unlocked their potential by surrounding superstar forward Giannis Antetokounmpo with strong perimeter shooting, allowing more space for the “Greek Freak” to operate when driving.

As a team, they score 117.8 points per game, which is second in the NBA, and up from a mediocre 106.5 last season. With Antetokounmpo playing at an MVP level, the Bucks are the most dangerous team due to their spurtability and outside shooting.

No team is happier to see LeBron out of the picture than the Raptors, who were swept by James and the Cavaliers in 2017 and 2018. Two moves that have led to the Raptors’ success this season are the acquisition of forward Kawhi Leonard, who has returned to superstar form, and the insertion of the athletic forward Pascal Siakam into the starting lineup, adding more speed and defensive versatility.

With the acquisition of center Marc Gasol, the Raptors can stretch the floor, as he is an adept playmaker, rebounds well and can protect the rim. He also provides valuable playoff experience that could help alleviate Toronto’s past playoff struggles.

The Pacers are most surprising team on this list. While they were expected to build off of last year’s playoff appearance, no one expected them to have the third best record in the conference at this point in the season.

The Pacers are without injured all-star Victor Oladipo for the remainder of the season, but they have remained strong, and are winners of five consecutive games as of February 10. They have the stingiest defense in the NBA, currently allowing 103.3 points per game.

Wesley Matthews, a new addition from the buyout market, is also promising, as he brings shooting, defense and valuable experience to this young Pacers team.

The days of trusting the process in Philadelphia are over, as they have been the most aggressive team in adding talent. After trading for all-star wing Jimmy Butler in November, they made another splash by trading with the Los Angeles Clippers for forward Tobias Harris.

Harris is a prototype for a modern day four, providing mobility, versatility and out- side shooting. On the Clippers, Harris aver- aged a career high 20.9 points on a career high 43.4 three-point shooting percentage.

While they have the best starting five with the addition of Harris, their lack of depth is concerning, especially in the backcourt. By trading Landry Shamet, the only guard that they trust off the bench is T.J. McConnell.

The preseason favorite Celtics have disappointed this season, struggling to incorporate new players into the lineup. Kyrie Irving’s impending free agency this summer has become a distraction to the team, and they just had their two worst losses of the season.

After losing to the Lakers on a buzzer-beater by former Celtic Rajon Rondo, they blew a 28-point lead against the Clippers be- fore losing 123-112, and getting booed by the home crowd.

Forward Marcus Morris called out the team after the loss to the Clippers, calling them, “a bunch of individuals.”

While they have had rough patches this season, they have had stretches of strong play. Before losing to the Lakers and Clippers, they had won ten of their previous 11 games, so they are still capable of beating any team at any time.

The Eastern Conference has become an arms race, with five clear favorites at the top. With two months before the playoffs, and new acquisitions joining teams, each of these teams will have room for growth in the next few months.

Of course, we cannot account for injuries that may occur in the next couple months. However, assuming that these five teams, as well as the rest of the teams in the Eastern Conference, stay as healthy as they are now, I expect the Bucks to hold on to the top seed for the remainder of the regular season.

Between Toronto, Boston and Philadelphia, anything is possible, considering how much talent and experience these teams have. Indiana, while playing well, will ultimately miss Oladipo in too many games moving forward to hold onto a top-four seed. The end of the season should be a wild ride in the East, and we as fans should all sit back and watch the chaos unfold.