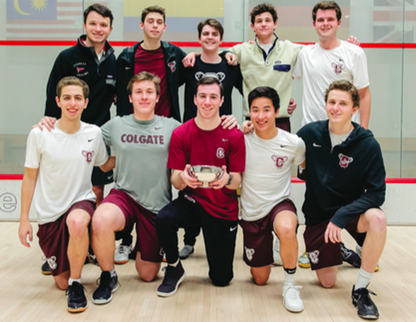 On February 15 to 17, Colgate’s Men’s Club Squash team competed in the national championship in New Haven, Connecticut and won. I know what you are thinking: I love a good gourd. Well, it isn’t that kind of squash. Although both the vegetable and the sport exist all year round, the Hawthorn Cup occurs during the spring semester in which college squash teams compete campuses on a national scale.

Squash is a game in which players compete against each other by hit- ting a hollow black ball within the confines of a court. The court allows for play between two competitors (or up to two teams of two) where the ball is hit tactically across the four walls of the court. In addition to being a competitive sport, it provides a great cardiovascular workout and can be played for life. Participation on Colgate’s team includes non-mandatory practices three times a week that involve rallying or playing points with team members.

The Colgate Squash team competed for the Hawthorn Cup, the National Squash Association Division G League tournament prize. First-year Matthew Webb attributes the victory to the skillset of his team members. The story begins with a “Dodgeball”-like plot, with an underdog team that came out on top after giving it their all. While Colgate’s top two squash players underperformed, the 7-9 seeds swept all their matches and offset the poor performances from the first two seeds.

Colgate was fortunate enough to have a first-round bye in the tournament. During the second round, William and Mary, which has a three-year-old club program with inexperienced players, eventually suffered under Colgate’s superiority. In the next round, Colgate faced off against Vassar College, a team that they had previously struggled during scheduled league matches. The glory associated with the Hawthorn Cup was enough to push the squash team over Vassar College and finally face Lehigh University, Colgate’s Patriot League rivals in the finals.

“[First-year] Dill Howards victory doubled our advantage against Lehigh, and he would continue to provide coaching to other players even after his match was finished. [Sophomore] Michael Malof successfully eked out a five-game victory to add to our advantage. The cup was only won when I beat my opponent into a corner” Webb said.

Colgate “reminded their opponents not to quit their day jobs,” Webb joked.

Dill Howard, currently ranked at number three, was also an anchor to the team’s vivacious success at Nationals. He won all three of his tough matches and will be a promising star for years to come.

In addition to the prestige associated with winning a division G college squash tournament, the Hawthorn Cup is a beautiful trophy. Webb described the cup as “slightly shorter than the average Frank salad bowl, nice and shiny, and not even a pound in weight.” The team still has yet to celebrate.

Although there is much to be proud of for participating on this team, the Men’s Squash team could always use more members. If you are interested in joining this victorious team in the future, don’t hesitate to try out. Even if you lack skills on the squash court, the team is always searching for leadership skills. If you think you may have skills with a racket, leadership ability or just love gourds, squash may be the sport for you.