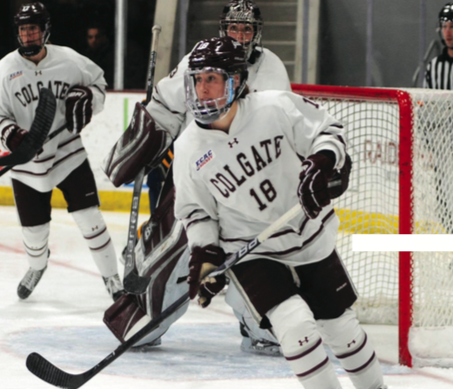 Battle for the ECAC

After a two-game sweep the previous weekend, the Colgate Women’s Ice Hockey team was on the road again this past weekend, February 9 and 10, to face off against St. Lawrence University and Clarkson University, respectively. The Raiders played their first game of the weekend on Friday night in Canton, New York.

The Raiders were the first to get on the board thanks to senior forward Jessie Eldridge scoring an unassisted goal with five minutes left in the first period. Just last week, Eldridge became the all-time points leader in program history. The Raiders ended the first period on top, 1-0.

With three minutes remaining in the game, Colgate regained the lead after sophomore forward Malia Schneider sniped a puck into the net with assists from senior forward Shae Labbe and senior defender Olivia Zafuto. The Raiders had a 2-0 lead with three minutes left in the game.

Five minutes of overtime was not enough to decide a winner, and the game ended in a 2-2 tie. Special teams was the story of the game with both of St. Lawrence’s goals coming from power-play situations. The No. 10 Raiders then headed to Potsdam, New York to face off in their second game of the weekend against No. 4 Clarkson University.

Colgate was first on the board 13 minutes into the game thanks to a goal by senior forward Bailey Larson, assisted by sophomore forward Coralie Larose and sophomore defender Shelby Wood. Clarkson was then able to get the equalizer just over a minute later to tie the game at 1-1. Both teams were locked in at one goal to end the first period.

Two minutes after Clarkson’s goal, Larson scored her second goal of the game to tie the game at two. Larson’s goal was unassisted. With six minutes remaining in the second period, Clarkson regained the lead with a power play goal to close out the second period on top, 3-2.

Colgate was firing on all cylinders in the third period but just could not seem to find an answer to Clarkson’s third goal. Then, with just over three minutes remaining in the game, Larose found the back of the net for the Raiders to tie the game. Larose’s goal was assisted by Eldridge and freshman defender Tanner Gates. The game was tied 3-3 at the end of regulation, and for the second day in a row, the Raiders headed to overtime.

Colgate came out of the gates flying from the drop of the puck and less than a minute into overtime, Schneider scored the game-winner. Scheider’s goal was assisted by first-year forward Rosalie Demers and Eldridge.

The Raiders next game is home on Friday February 15 at 6 p.m. against Yale at the class of ’65 Arena.