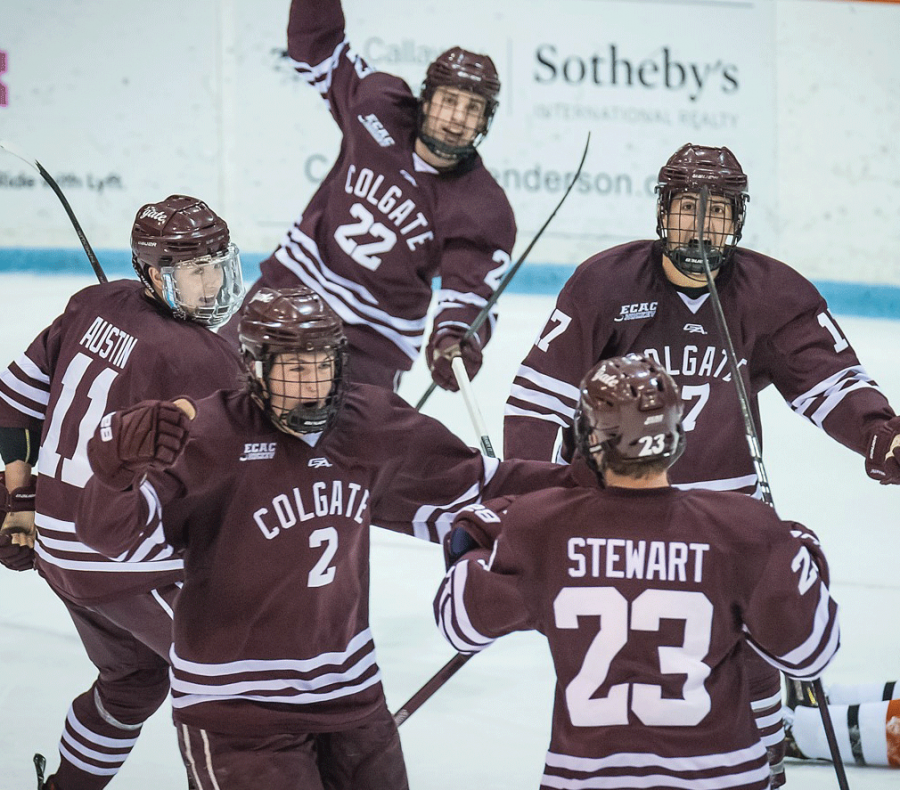 The Colgate men’s hockey team had an important weekend January 25 & 26 playing rival Cornell, both nights and hosting them on Saturday. Unfortunately, Colgate fell to Cornell on Friday night, 2-3; fortunately, they bounced back on Saturday night, winning in overtime to secure a 3-2 victory. Two key players in the Raider victory were freshman goaltender Mitch Benson, who had a 41-save performance, and junior forward, John Snodgrass, who had a two-goal game, including the overtime goal. This game was not only special because of the win, but also because it marked the annual “Courage Classic” with children of Camp Good Days, which is a program for children and families affected by cancer.

On Saturday, Cornell had an early advantage, scoring only 2 minutes after the puck dropped, but Benson was able to keep the Raiders in the game with incredible goaltending throughout each period. The game was tied at 1 after junior John Snodgrass scored right before the first period buzzer. Junior defender Paul Meyer continued the scoring for the Raiders just 15 seconds into the second period. After his goal, the Raiders relied on strong defense for the rest of the period. Benson kept his ground, making 17 saves to keep the Raiders ahead 2-1 going into the third period. Despite strong play, the Big Red were able to get a goal passed Benson with just 6:18 remaining to force overtime play.

Benson commented on the Raider’s bounceback performance after the game.

“Starting off the second period with that goal was huge. Right off the bat like that, it silenced the crowd a bit and got our bench fired up. I’m really happy for our seniors that we were able to get this win and it’s a good thing to propel us forward.”

Sophomore forward Josh McKechney took the puck into the Cornell zone and Snodgrass got the rebound in overtime to gain a 3-2 victory. This was Snodgrass’s first career multi-tally game, both the tying goal and the overtime game-winner. He commented on his team’s performance.

“It was a lot of fun to beat those guys for the first time in a while, especially after they had just beaten us Friday. Every single guy worked extremely hard and that’s the result that can happen when everyone is on top of their game.” Snodgrass said.

Paul Meyer also commented on the big win after the game.

“Beating Cornell at Lynah was a huge team win and scoring made it that much more special. Everyone contributed in one of our biggest wins of the season and Benson played out of his mind and deserves a lot of the credit. He made multiple huge saves to help us get the win. Beating Cornell is always great, especially for our seniors, which could be the last time they get a chance to play against our rivals.”

This win has given the Raiders great momentum for their upcoming week. In addition to being Colgate’s first win over Cornell since February 8, 2014, the win also marks the Raider’s first win in Ithaca since January 27, 2012. This victory was important for the Raiders to stop their five-game losing streak and even more impressive considering it snapped Cornell’s eight-game winning streak. This game marks Colgate’s third victory over a ranked opponent this season.

Colgate is back on the road next weekend, traveling to RPI and Union to keep up with the ECAC play on February 1 and 2. They return home on Friday, February 8 against St.Lawrence at The Class of 1965 Arena. Be sure to stay tuned for these games and cheer on the Raiders!