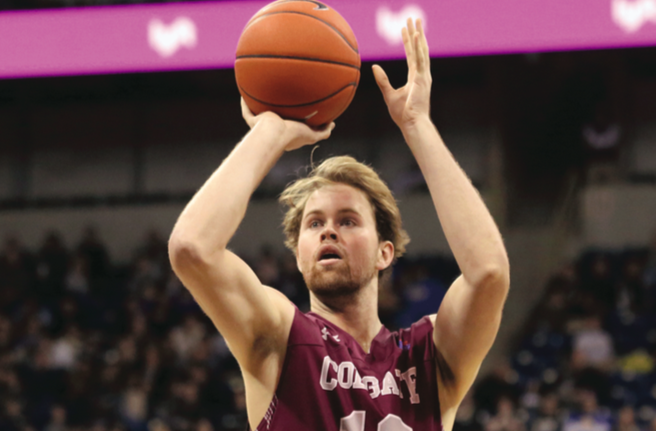 1-1 Week Helps Raiders Remain in Top Half of Standings

After an astounding 77-56 victory at Boston University on Saturday, January 19, the Colgate Raiders were feeling confident as ever. But bad news broke two days later when their star point guard, sophomore Jordan Burns, injured his lower leg, which could keep him out for a couple of weeks.

The Raiders played without their dependable 17.6 PPG and 5.5 assists as they faced off against the Lafayette Leopards on Wednesday, January 23 in Hamilton. Although the Leopards had been struggling (7-12 record), they had recently defeated Loyola Maryland who has been one of the hottest teams in the league. The Leopards also lost to Lehigh (currently second in the Patriot League) by a slim margin of three points.

The game was a challenge for Colgate. First-year shooting guard Tucker Richardson had to take a bigger role in the offense, even playing some point guard, as a result of Burns’ injury. Richardson was also tasked with guarding Alex Petrie, the reigning Patriot League rookie of the year. He didn’t disappoint by holding Petrie to five for 16 (31 percent) from the floor. The star first-year also fulfilled his point guard duties by dishing out five assists and grabbing eight rebounds. As a result of great play from Rapolas Ivanauskas, Dana Batt and Will Rayman scoring 13, ten and 12 respectively, Colgate pulled out the hard- fought victory with a final score of 57 to 47. It was a gritty defensive battle throughout, but Colgate ultimately triumphed.

After that victory, the Raiders sat in the Patriot League standings as the fourth best team based on their record, and are currently undefeated on their home court at the Reid Athletic Center (7-0). Colgate ranks second in offensive efficiency and fourth in defensive efficiency in the league (Kenpom stats). Also, thanks to their tall lineup with three out of their five usual starters being over 6’8”, the team leads the conference in defensive rebounding percentage and are second in offensive rebounding percentage.

Their following matchup was at Loyola Maryland on Saturday, January 26, still without Burns. Facing off against one of the best players in the conference, Greyhound guard Andrew Kostecka, Colgate knew it would be tough game for them to win. The formula of the game was similar to that of the Lafayette game: have Richardson handle most of the point guard duties. Once again, he didn’t fail. He totaled nine assists, and even had one of them most crucial passes in the game. With the Raiders down two points with 1.2 seconds left, Head Coach Matt Langel, the reigning Patriot League coach of the year, ran an inbounds play to perfection with Richardson dishing the ball to forward Will Rayman under the basket for an easy layup as time expired. This tied the game up at 68. Overtime ultimately didn’t go as the Raiders planned as they ended up falling 79-72.

It was a great overall effort by the team, as Batt continued his hot streak with a season high of 18 points on nine of ten shooting and, off the bench, forward Malcolm Regisford added twelve points and five rebounds in just 17 minutes of play.

The Raiders next will take on Boston University on Saturday, February 2 in Hamilton, NY at Cotterell Court at 1 p.m.