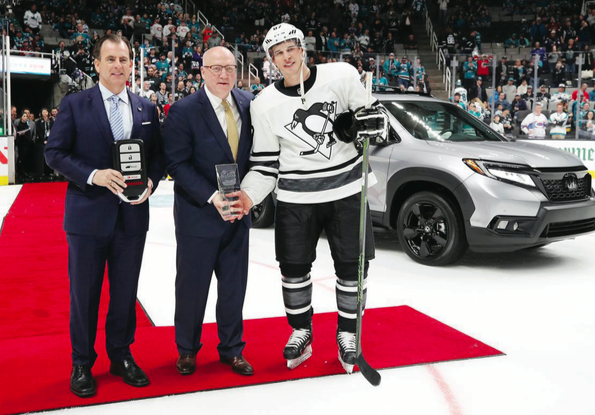 NHL All-Star weekend is an annual tradition where the best of the best come to showcase their talents in a skills competition followed by a game the next day. To the ordinary hockey fan, this weekend can be very exciting. Some past All-Star Weekend highlights include John Scott, one of the league’s most beloved “enforcers” winning MVP in 2016 and Connor McDavid recording a lap around the rink in 13.454 seconds in 2018. The skills competition is always a treat to watch, while the All-Star game itself is an offensive showcase.

This year’s All-Star game took place in San Jose, California on January 26. For the first time ever, a woman participated in the skills competition. U.S. Olympic gold medalist Kendall Coyne showcased her speed Friday night in the speed skating event of the skills competition. Coyne competed her lap around the rink in 14.346 seconds, beating Arizona Coyotes forward Clayton Keller, who came in at 14.526 seconds. Coyne was hopefully the first of many women to participate in the All-Star weekend.

On Saturday night, the All-Star game itself was finally underway. To many fans, the three-on-three play and high scoring affair is a joy to watch. However, to the goalies participating in the game, it is one of their tougher nights. Facing off against the best of the best is one thing, but doing it when they have a lot of open ice to take advantage of their skills on is exhausting.

The first of two matchups featured the Central Division vs. the Pacific Division. Blackhawks forward Patrick Kane was the star of the first game with two goals and an assist. Colorado Avalanche forward Gabriel Landeskog also had a hat trick, ultimately leading the Central Division to a 10-4 win over the Pacific division and a spot in the championship game.

Next year’s NHL All Star game will take place in St. Louis on Sunday, January 26, and we can only hope it is as exciting as it was this year.