Reflections on the Power of Youth & Social Change 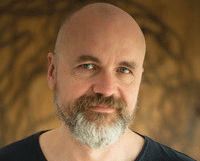 Romanian visual artist Bogdan Acimescu visited Colgate on December 5 for the Wednesday Art & Art History Lecture Series, a program that is co-sponsored by the Program in Western Art and Center for Freedom and Western Civilization. Acimescu studied art at the Fine Arts School in Timisoara and the Institute of Visual arts in Cluj. In his work, he mixes drawing, storytelling and written text. Acimescu’s pieces are in collections around the world, including the MoMA, the National Gallery of Art and the Vienna Albertina. Between 2000 and 2004, Acimescu also taught at several American universities, including the University of Virginia and the University of Arizona, Tucson. For Acimescu, storytelling is everything.

Acimescu began his performance by reflecting on the geopolitics of Eastern Europe, recalling that certain political climates were a matter of life and death.

“Knowledge and wisdom are the only things that guarantee our future in the long run,” he said.

Remembering that the Romanian revolution was the marker of the fall of Communism in the 1980s, Acimescu began discussing the ingredients needed to ignite social change. In true storytelling fashion, he shared his definition of the term “generation”: a group of people between the ages of 19-26 who share a common trauma and the same methods of dealing with their struggles.

Employing four projectors for a multi-sensory experience in Golden Auditorium, Acimescu shared four parts of his recipe of change. His first image was a reconstructed office of the Rector in the Fine Arts Academy of the Cluj in Romania. A student by day and a guard at night in this building, Acimescu had unique perspectives on this institution. He recalled a time when a group of youths stole crystals from a chandelier in this office. Using a projector, drawing on transparency sheets and writing with chalk on the walls of Golden, Acimescu mysteriously retold these stories of his times at the Cluj, his mischiefs during the night shift and his reflections on freedom and revenge in his decisions at the time.

Moving on from his storytelling of “youth,” Acimescu advanced to discussing the “problem” of living under a dictatorship in Romania. He described the limited access to international movements and the lack of freedom and mobility within the country itself. In his story of walking down a street, Acimescu described how living in Romania at the time was unbearable. He figuratively passed the building that used to house art in Romania and described the ways that the paintings were destroyed while he preserved an internalized fear for the future of his country.

Acimescu spoke of his demoralizing times at the Cluj under intense censorship and moderation. “Studying art was preparing students for a non-market,” he said.

His professors of socialism preached nationalist rhetoric as a way to counterbalance the nation’s trauma. Acimescu remarked on the projected drawing of his printmaking teacher that “left becomes right and right becomes left.”

The audience chuckled as Acimescu related this art experience of printmaking to how oppositional politics can be and the ways in which politicians preach with hidden messages.

His third story was a personal reflection on his childhood home above a dairy shop. Acimescu recalled the lines of people and the conflicts outside as people became desperate for food. The strategies employed to deal with a lack of materials extended to strategies of dealing with mental trauma; people in Eastern Europe sought solitude.

Acimescu also spoke on his mountain climbing endeavors with no experience or proper materials due to the Communist regime.

Lastly, he reflected on his mission to purchase a ticket from the train office in Cluj for a seat on the night train, headed south. Acimescu recalled that it was merely himself and two others on the train, and he paused to reflect on seeing anti-government graffiti for the first time in his life.

Acimescu finished his lecture by stating his concern for the similar autocratic behaviors in both Eastern European governments and the U.S. government today and said that younger generations should be weary of increasing state power.

Sophomore Bailey Applebaum reflected on Acimescu’s engaging performance.“It was interesting to see how he lived under Communism, the day-to-day struggles and the ways that they had to live with those restrictive challenges. I was inspired by his resourcefulness in living under a unitarian government,” Applebaum said.