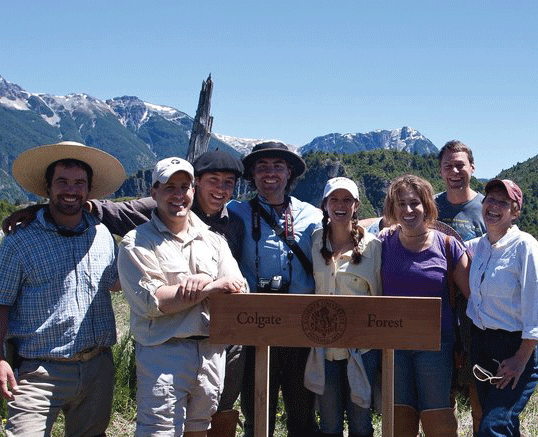 In 2012, Colgate invested in a reforestation project in Patagonia Sur in Chile to offset the school's carbon footprint. The plot has been named the Colgate Forest in recognition of our contribution.

The Colgate Sustainability council hosted an open panel on Colgate’s goal of being carbon neutral by Spring 2019 on Thursday, December 6. Colgate is vying to be the first college or university in New York to reach this goal. If this goal is reached, Colgate will also be the 2nd carbon neutral school in the Patriot League, after American University.

“I feel like I have been working toward this since I walked through the door,” Cardelús said.

Colgate’s carbon footprint focuses on four initiatives: buildings, air travel, ground travel and other. With buildings emitting 57% of our footprint, the sustainability council has tried to eliminate any unnecessary emissions with projects such as building upgrades, lighting improvements, carbon sequestration and installing low flow shower heads, which was a project accomplished by Caredelús and her students. President Brian Casey also said that student and faculty travel makes cutting back the school’s carbon footprint incredibly difficult, but limiting student travel is not an available solution.

To deal with carbon emissions that cannot be eliminated, such as carbon emitted by travel, the council has invested in carbon offset programs. For example, Colgate planted trees in Patagonia Sur in Chile to sequester carbon that cannot be physically eliminated on campus. This solution has received some pushback from students and faculty, and Casey said that he understands why this solution may not feel satisfying.

“On the one hand, [using offsets] feels dissatisfying, because Colgate has the resources to [invest in] offsets and that doesn’t feel right. But we want to keep our vow to be neutral, and I was not going to break that vow,” Casey said. “Are there other ways we can offset our footprint that are more satisfying, more productive?”

Pumilio said that although working toward this goal is an incredible feat for our community, the effort to reduce carbon does not end in 2019. The effort is continuous, Pumilio said, and future projects include developing an energy master plan, creating departmental working groups and promoting a LEED silver minimum for all buildings.

Efforts such as the Green Revolving Loan Fund, a program that raises money to invest in renewable energy projects on Colgate’s campus, will also be crucial in continuing this effort.

Weiler, a sustainability council member, emphasized how involved the student community has been in the effort to reach carbon neutrality. Weiler hosted a student run panel and said that the attendance and responses she received shows that Colgate students recognize their potential to combat climate change and understand the intersectionality of issues.

“If we don’t have a planet, no other issue matters,” Weiler said, “Nothing else matters.”

The presentation closed with a question portion for the seven panelists, in which students questioned what else Colgate could be doing to continue leading the movement combating climate change, such as limiting our meat consumption.

“I was shocked to hear that travel is such a big source of carbon,” said sophomore Annie Knowles. “I had never thought about how professors and students traveling would impact our carbon footprint.”

Casey said he feels confident the 2019 carbon neutrality goal will be met.