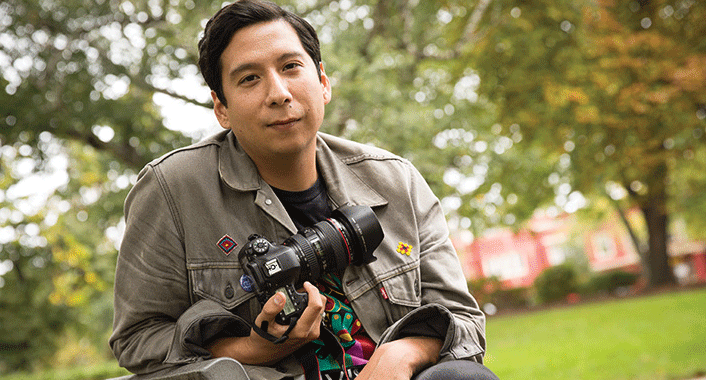 Praised as one of the most exciting new voices in alternative cinema today, Sky Hopinka, filmmaker and artist, visited Col- gate on Tuesday, November 27. This event, co-sponsored by the Film and Media Studies department and the Native American Studies department was titled “We All Seemed to be Having the Same Dreams.” During the event, Hopinka showed a selection of videos that focused on indigenous politics and language, landscapes, familial connection, memory and gender identity.

Hopinka was born and raised in Ferndale, Washington and is currently based out of Cambridge, Massachusetts. He previously has studied and taught Chinuk Wawa, a language indigenous to the Lower Columbia River Basin. His videos center around his personal perspectives on indigenous landscape and homeland. Hopinka uses language and text as visual place markers for culture and thrives off the ambiguous space between the known and the unknowable.

His work has played at various festivals, including ImagineNATIVE Media + Arts Festival, Sundance and Chicago Underground Film Festival, among others.

To create his films, Hopinka uses a process called “ethnopoetics” to frame and visualize discrete indigenous identities. A common theme throughout his video work is the ways in which he engages in diverse forms of portraiture to capture complex, sensitive and engaging subject matter. His films tackle the two-spirit camp at Standing Rock, Native activist Diane Burns, ethnobotany, the myths of knowledge systems and the survival of the Hočak language.

The first film shown, titled “Dislocation Blues (2017),” was an imperfect and incomplete sampling of narratives from the Standing Rock camp. Cleo Keahna recounts his experiences at and after the camp, as well as the difficulties of living with nostalgia. Additionally, native activist Terry Running Wild narrated the story of his camp from a personal, emotional perspective and provides his hopes for the future of Standing Rock.

Next, the audience was treated to “Visions of an Island (2016),” in which Hopinka attempts to portray the Unangam Tunuu tribe, located on St. Paul Island in the center of the Bering Sea. A tribal elder describes the visuals that Hopinka shows while speaking about the cliffs, summits, species of birds and deserted shores. Later in the short film, a group of students and language teachers play invented games in an attempt to relearn and revitalize their Indigenous language. Hopinka has been working with different Indigenous languages for the past eight years to explore various facets of indigenous culture outside of traditional anthropology and traditional indigenous films.

Next, a film titled “Jájji Approx.” (2015) explored the intimate relationship of Hopinka and his father. The film begins by showing landscapes that the two have traversed, separately, and is juxtaposed with audio recordings from Hopinka’s father and recollections of songs both new and traditional.

“Fainting Spells (2018)” provoked the audience and proved to be one of Hopinka’s most fascinating videos. In a film that is told through recollections of youth learning, folklore and places of departure, Hopinka depicts a self-imagined myth for the Xawiska, or Indian Pipe Plant. This plant has historically been used by Hopinka’s tribe, the Ho-Chunk, to revive those who have fainted. Language was a critical strength of this film. Hopinka shows how language has been incorporated into myth-making, and he redirects the context to suit his purposes and explore how information has been lost over time.

Hopinka spoke to his awareness and the idea of being a visitor in life, saying “there is a native community everywhere you go” and stressed the importance of respecting tribal communities’ agency and solidarity within their own cultures. He also spoke of the different factors surrounding privacy and agency in filmmaking, as he tries to propose obstacles for himself in his practice. Namely, acknowledging that simply because Hopinka is native does not mean that he has access to all natives’ stories, cultures or permission to document and share them.

Hopinka is currently a fellow at the Radcliffe Institute for Advanced Study at Harvard University and Sundance Art of Nonfiction Fellow for 2019.