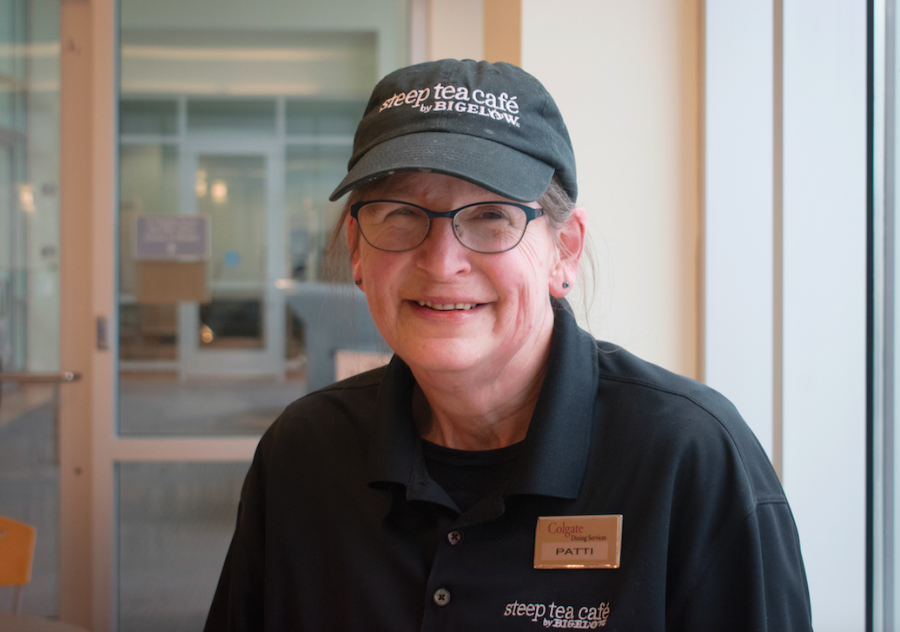 Each year, The Colgate Maroon-News chooses a topic to highlight for a Special Edition. This December, our theme is “People of the Year,” modeled after Time Magazine’s annual “Person of the Year” issue. In this special section, we have profiled sixteen individuals who have had made significant—and perhaps lesser-known—impacts on Colgate’s campus this year, be they in the classroom, at the football field or even on the Cruiser. Inside, read about what defines them as worthy of recognition.

Originally from Georgetown, New York, Patti Van Voorhis began working in the food service industry at Colgate ten years ago when she started contributing to her family’s income. However, working at Colgate in the Hieber Cafe is more than just a job for her. Van Voorhis loves interacting with students and enjoys working at Colgate for that reason.

“It is truly the students and the Colgate community who make coming to work meaningful,” she said.

Her attitude about her work shows in her impact on the students she serves. Van Voorhis was particularly close to the members of the Class of 2014, who presented her with their class award.

Even though the Class of 2014 graduated, Van Voorhis continues to impact students during her time in the Hieber Cafe. First-year Molly Mysogland has fond memories of Van Voorhis’ personable demeanor and welcoming attitude.

“As a first-year, having someone as sweet as Patti know my name and be as kind as she is made the transition to a new school so much better,” Mysogland said.

Most students love Van Voorhis for her calming and motherly presence in Case-Geyer Library, a place often associated with stress. Her advice to students proves powerful: seek out the best in those around you and choose to have a good attitude.

“I truly believe attitude is a choice,” Van Voorhis said. “I believe if you can choose between being happy or sad—be happy.”

She also encourages students to remember the importance of connecting with other people.

“You are going to leave this world with the same amount you came into it with; it is the lives you touch along the way that has true value,” Van Voorhis said.

In addition to guiding Colgate students through the difficulties of college, she also has children of her own. When she was 22, Van Voorhis was diagnosed with stage four cancer and given less than six weeks to live, even with cancer treatment options. Her cancer was discovered after she partook in a physical examination when she applied to adopt her children. Clearly, and thankfully, the doctors were wrong.

For this reason, Van Voorhis calls her children “an answer to a prayer.”

She ended up adopting eight children: four of African descent, two of Asian descent, one of Syrian descent and one of European descent.

Given Van Voorhis’ unconventional family, she has distinct views about the importance of family and diversity.

“If only the world could coexist as a diverse family like ours,” she said.

When Van Voorhis is not on Colgate’s campus, she stays huddled up in front of her fireplace with a cup of her favorite type of coffee: white chocolate coffee or cannoli coffee. She even has ideas of her own about how to improve coffee distribution.

“I have grand ideas of inventing an intravenous coffee device, which I think would go well on college campuses around the country, especially during finals,” she said jokingly.

Ultimately, Van Voorhis is not only a great source of wisdom and advice, but she has also impacted the lives of many students and is always ready to serve your hot coffee with a warm smile.