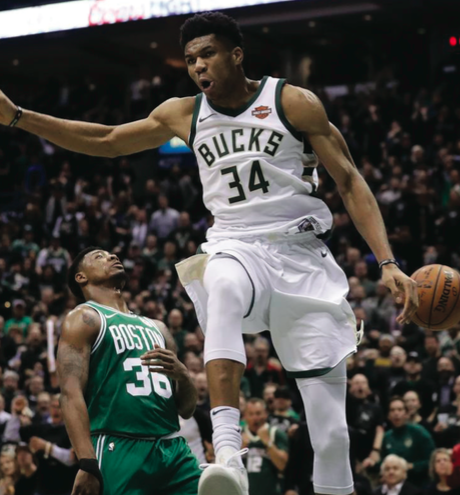 Milwaukee Bucks guard Giannis Antetokounmpo is top five in points (27.6) and rebounds (13.2) per game. He is earning a place in the MVP conversation.

The sports world is having a hard time tuning out the displeasures of NBA fans. Over the last four years, there has been one theme in the NBA: LeBron James (with the Cleveland Cavaliers or Miami Heat) vs. the Golden State Warriors.

However, this year, with James in Los Angeles, we are seeing much needed contrast as we near Christmas Day NBA games.

In fact, I find the NBA intriguing right now. And I think people need to look beyond the Golden State Warriors and James to realize this season will be far different. Take a look at all the headlines we have seen in just over a month of basketball: outcast small forward Carmelo Anthony was cut, controversy surrounded Warriors stars Kevin Durant and Draymond Green, and a blockbuster trade sent Jimmy Butler to Philadelphia for Dario Saric and Robert Covington.

The Eastern Conference playoffs has a group of teams that look like legitimate title contenders. These teams include the Boston Celtics, Milwaukee Bucks, Philadelphia 76ers and Toronto Raptors.

The Celtics got off to a rocky start in the early 2018-19 season, in part because of guard Kyrie Irving and forward Gordon Hayward returning from injuries, needed time to develop chemistry.

A team that has been recognized for their youth and continuity is the Bucks. Led by Greek sensation Giannis Antetokounmpo, they have had impressive wins over Golden State and Toronto and hold a respectable 15-7 record.

But the biggest surprise of the East are the current leaders in the Toronto Raptors. Newcomer Kawhi Leonard looks like a man on a mission to get a big contract in free agency this upcoming summer, averaging 25 points and eight rebounds.

Though the top looks bright for the East, the most intriguing part is the last few playoff spots. We are seeing teams come back into playoff contention that have not been there in a number of years. It is wild to think that this year there will be a team among the Brooklyn Nets, New York Knicks, Washington Wizards, Miami Heat and Orlando Magic that will make the playoffs as one of the eight from the Eastern Conference.

All of these teams are struggling right now, but some could say that the majority of them are in a rebuilding process.

The Knicks and Nets have both been riddled by injury this season. The Washington Wizards are probably in the most dismay with the regression of guards John Wall and Bradley Beal.

In Florida, the Magic actually look promising with their young, scrappy team led by Aaron Gordon and Nikola Vucevic. The Heat? Well, they are extremely mediocre, and overpay NBA shot blocker Hassan Whiteside.

Overall, this NBA season has so much potential. I think that for the first time in a while there’s a sense of uncertainty in the NBA which is definitely beneficial, as it will lead to new teams being contenders and new stars rising to the occasion.