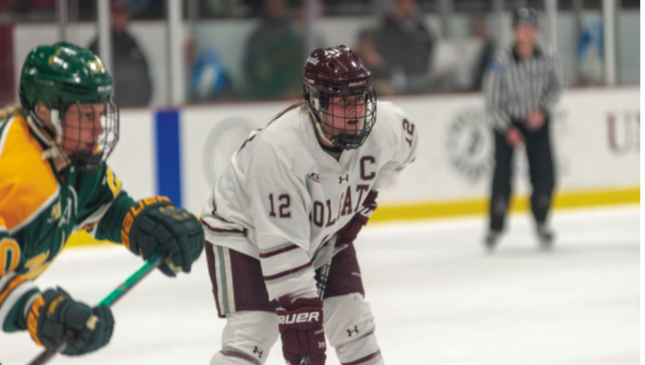 Raiders Get Back to Business, Avenge National Championship Loss

After over a month of being away, Colgate Women’s Hockey finally returned to Hamilton last Friday night, November 30, to square off in an NCAA championship rematch versus the #3 Clarkson University Golden Knights.

The Raiders wasted no time getting into the game in the Class of 1965 Arena.

“This has been a game that has been on our radar for a long time coming,” Director of Women’s Hockey Operations Josh Graser said.

Less than four minutes into the game, first-year Tanner Gates put Colgate on the board with a power play goal thanks to assists from Jessie Eldridge and Malia Schneider. The Raiders finished off the first period with a 1-0 lead.

The second period was very back and forth with both Clarkson’s goaltender and Colgate senior Julia Vandyk making incredible saves for their teams. However, it was Colgate who finally capitalized on another power play goal with 24 seconds remain- ing in the second period. Colgate’s goal was scored by senior tri-captain Shae Labbe. Labbe’s goal was assisted by Olivia Zafuto and Bailey Larson. The Raiders closed out the second period leading the Golden Knights 2-0.

Labbe continued her presence in the game scoring her second goal of the contest four and a half minutes into the third period with assists from Schneider and Shalby Wood. Labbe’s second goal gave the Raiders a 3-0 lead.

However, Clarkson continued to fight back, scoring a short handed goal with five minutes left in the third period to make it 3-1.

With twenty seconds left in the game, Schneider scored her third point of the night to make it 4-1. Schneider’s goal was unassisted.

Colgate finished off the night with a dominant 4-1 win over Clarkson, extending their record to 8-4-2.

On Saturday, December 2, the Raiders were back on home ice to face off against the #9 Saints of St. Lawrence University. The Raiders hoped to finish off the weekend with two wins over ranked opponents.

Ten minutes into the game, St. Lawrence’s goaltender attempted to play the puck in the corner in hopes of catching Colgate in a change. However, as her teammate collided with her, Coralie Larose was able to collect the puck behind the net and hit Rosie Demers with a beautiful pass for a wide open score. Demers’ third goal of the season gave the Raiders a 1-0 lead.

With three minutes remaining in the third period, Shae Labbe scored a beautiful goal with an amazing pass from her fellow tri-captain, Jessie Eldridge. Malia Schneider also picked up an assist on the goal. Not only was this goal Labbe’s third of the weekend, but it was also her 50th goal of her Colgate career. The Raiders closed out the first period with a 2-0 lead of the Saints.

Colgate continued to fire shots on St. Lawrence in the second period. With some big stops from Colgate’s goalie, Julia Vandyk, the Raiders continued to hold their lead despite the Saints surge of offense.

With five minutes remaining in the period, Jessie Eldridge scored the Raiders’ third goal of the night with an assist from Malia Schneider. Colgate finished off the second period leading St. Lawrence 3-0.

With a little over ten minutes remaining in the game, St. Lawrence capitalized on a power play making the score 3-1. The Raiders were not deterred. Bailey Larson scored an empty net goal with 42 seconds remaining assisted by Olivia Zafuto. However, the Raiders were not finished quite yet.

With 33 seconds remaining in the game, sophomore forward Kendall Williamson scored to give the Raiders a 5-1 lead. Assisted by Shae Labbe, this was Williamson’s first career goal. As she put the puck into the back of the net, her teammates lit up with excitement.

The Raider’s finished off the night with a dominant 5-1 win over Saint Lawrence University. With the weekend sweep over two ranked opponents, Colgate Women’s Hockey fans have a lot to be excited about.

The Raiders next game will be on Thursday, December 6, at 7:00 pm EST in Syracuse, New York, against the Orange of Syracuse University. Both teams will then face off again in Hamilton at the Class of 1965 Arena on Saturday, December 8, at 3:00 pm EST.