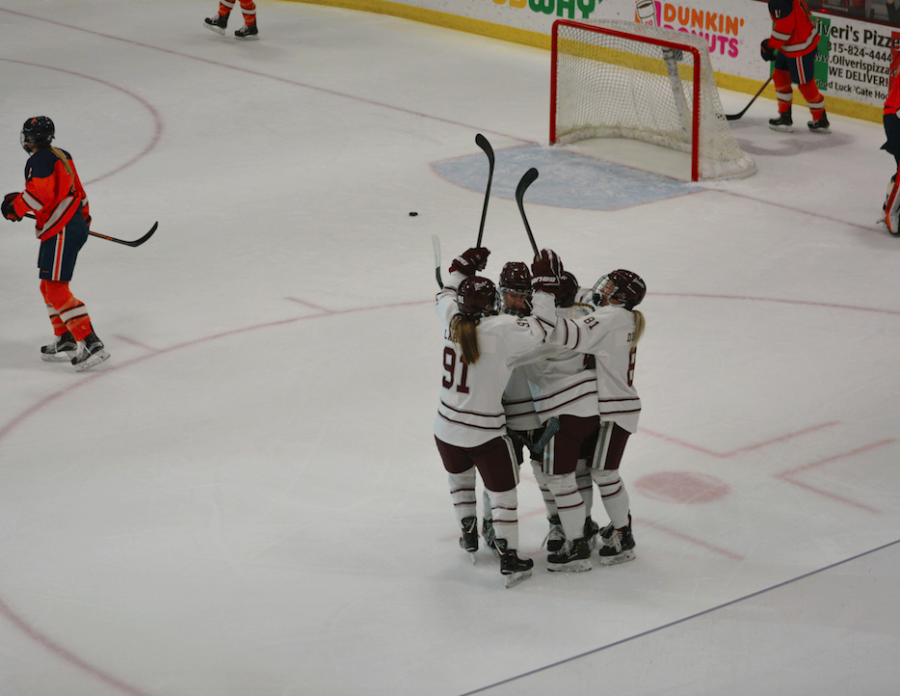 After a dominant weekend with two wins over ranked opponents, the Colgate Women’s Ice Hockey team looked to get back to business this week and finish off strong in non-conference play. The Raiders faced off against the Orange of Syracuse University on Thursday, December 6 at the Tennity Ice Pavilion.

The Orange struck first, four minutes into the first period, but Colgate was unfazed. Just over a minute after Syracuse tallied their first goal, first-year Delani MacKay put the Raiders on the board with a power play goal. Mackay’s goal was assisted by her twin sister Eleri MacKay and senior Shae Labbe.

After a scoreless second period for both teams, Syracuse notched a goal about two minutes into the third period to make the score 3-2. However, the Raiders got right back to business with another power play following Syracuse’s second goal.

On the power play, senior Jessie Eldridge scored for Colgate to give the Raiders a two goal lead once again. Eldridge’s goal was assisted by first year Rosalie Demers.

With under two minutes to go in the game, Eldridge scored her second goal of the night assisted by sophomore Malia Schneider to propel the Raiders to a 5-2 win over the big Orange.

With two consecutive two-goal nights for Colgate, the Raiders had a lot to be happy about after the win.

Following Thursday night’s contest in Syracuse, both teams made the hour-long voyage to Hamilton, N.Y., for the second matchup in the Class of 1965 Arena.

With 59 seconds left in the first period, the Orange struck first with a shorthanded goal. However, just like Thursday night, the Raiders quickly responded with a power play goal by Schneider assisted by Eldridge and Coralie Larose. Schneider’s goal came just eight seconds after Syracuse took the lead. The score was tied 1-1 at the end of the first period.

Halfway through the second period, Malia Schneider tallied her second power play goal of the night to give Colgate its first lead of the game. Both Eldridge and Gates assisted Schneider’s goal. With a 2-1 lead going into the third period, the Raiders hoped to keep the momentum to finish out the game.

With 14 minutes remaining in regulation time, the Raiders continued their dominant power play with Eldridge tallying her third point of the night on an unassisted power play goal, making it 3-1. Syracuse continued managed to answer with one goal three minutes later to cut the Raiders’ lead in half.

With ten seconds left, Bailey Larson sniped a shot into the Syracuse empty net to lead the Raiders to a 4-2 win over the Big Orange. Larson’s goal was assisted by senior Olivia Zafuto and Jessie Eldridge. Eldridge has provided fantastic offensive spark for the Raiders thus far, leading the team with 23 points.

The Raiders are feeling good going into the holiday break on a four game winning streak. Women’s Ice Hockey’s next game is Saturday, January 5, at 3 p.m. against Mercyhurst.