Colgate Targeted in “It’s Okay to Be White” Trolling Campaign 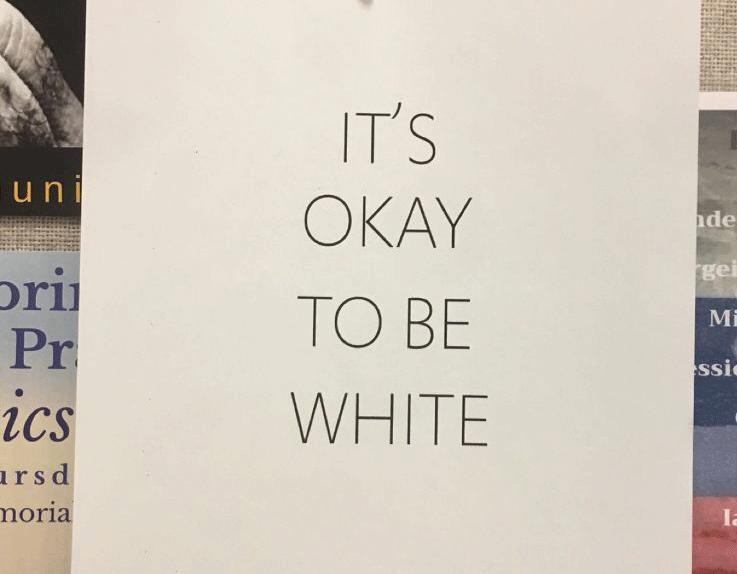 This poster was found in Lathrop Hall by Professor Meg Worley on Thursday, November 1.

Dozens of posters with the phrase “It’s Okay to Be White” appeared in campus buildings in the early morning of Thursday, November 1. The posters were part of a much broader and calculated international trolling effort by white supremacists that originated from Internet forums 4chan and Reddit. The campaign was designed to provoke a reaction and, in its creators’ words, “trigger the left.”

Because the “It’s Okay to Be White” posters had no information about their source, custodial staff members were instructed under University policy to remove them, Gough said.

He noted that many faculty, staff and students also took the fliers down at their own volition.

The goal of the trolling campaign, according to posts on 4chan and Reddit, is to use an ostensibly innocuous phrase to elicit a negative media response, and then cite the media reaction to push people toward the far-right. One Reddit user characterized the effort as a “low risk, high reward operation that is proven to expose racism and hatred on the left and drive [mainstream media] insane.” Other Reddit users described mainstream media sources who reported on the posters as having “taken the bait.”

Richard Baker, president of the American Association for Access, Equity and Diversity, told Inside Higher Ed that “the intent of the flyer’s author is not to state the obvious… [its] purpose is to attract persons who may be sympathetic to [the position that whites are a marginalized group] but may not respond to a swastika or other traditional symbols of white nationalism or direct recruitment.”

According to the Anti-Defamation League, the phrase “It’s Okay to Be White” has historically been adopted as a slogan by white supremacists.

The ADL says that posters featuring the slogan date back to 2005, and that the phrase was used as a song title by white supremacist band, Aggressive Force, in 2001. It was first inserted into the 4chan trolling campaign last November, when fliers were posted at dozens of colleges (not including Colgate). At that time, David Duke, former Grand Wizard of the Ku Klux Klan, tweeted: “‘It’s OK to be White’ going up on universities across the U.S. & Canada. The hateful response proves ubiquitous anti-white hate & racism!”

“The fliers appearing on campus demonstrated that there are some individuals locally who wanted to stimulate conflict within the Colgate community, while remaining anonymous,” Professor Nancy Ries, Director of the Division of University Studies, said. “The spreading of these posters was not an innocent prank: it was intended to cause harm, or at the very least, lead to anger, humiliation and ridicule at the hands of on and off-line trolls.”

In response to the posters, the Division of University Studies is organizing series of events about extremist movements. According to Ries, the aim of these events is to address the nature and tactics of hate groups, as well as to discuss how to prevent neo-Fascist organizations from penetrating into our communities.

“Given the race-baiting nature of the provocation, [the right response is] to not take the bait but to be responsive in the way we are at our best, which is to be intellectual,” President Brian Casey said.

The first installment of the series will be a faculty panel titled “White Supremacists, Neo-Nazis, and Domestic Terrorists: How to Oppose the Return of Fascism.” It will take place on Tuesday, November 13 at 7 p.m. in Lawrence 105.