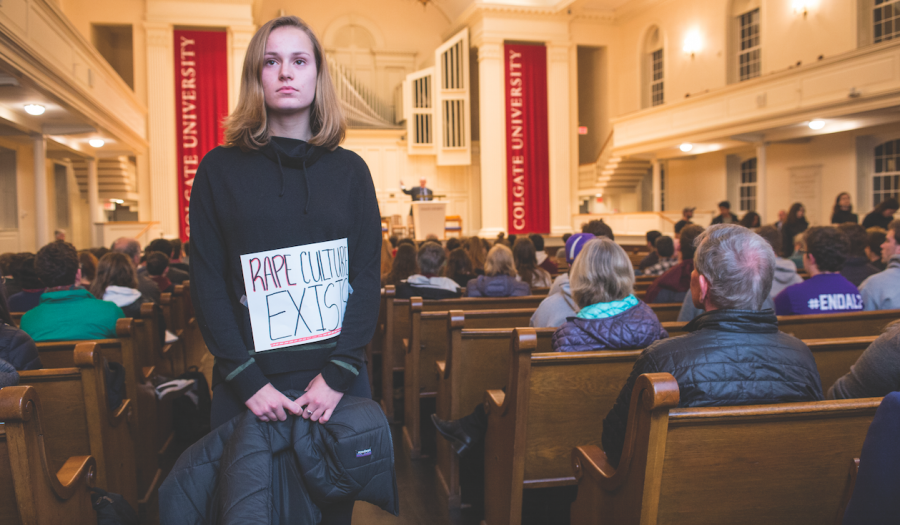 Protestors stand in the Colgate Memorial Chapel’s aisles with their backs to lecturer Alan Dershowitz as he takes the stage and begins his lecture.

Protestors stood in the aisles of the Colgate Memorial Chapel during lawyer Alan Dershowitz’s lecture as he spoke about free speech and the value of difficult political conversation in the age of Trump on Monday, November 5.

Dershowitz was invited to speak by the Center for Freedom and Western Civilization, which is a forum for debate and scholarly research among students and faculty. His lecture was initially protested when posters were put up around campus on Monday, October 29. The anonymous posters read that Dershowitz was an “accused child rapist,” referring to accusations made in 2014 that an underage girl employed by Dershowitz’s former client, Jeffrey Epstein, was forced to have sex with Dershowitz, among others. Reuters reported that the charges against Dershowitz were stricken from the record in 2015.

The 20 protestors stood when Dershowitz was first introduced and revealed signs that read “Our Voices Matter,” “Believe Survivors” and other phrases supporting survivors of sexual assault. They walked into the Chapel’s aisles, as if to leave, then paused. Dressed mostly in black, they remained in the aisles with their backs facing Dershowitz for 13 minutes, at which point they exited the Chapel. The protestors explained in a statement that this time interval referred to the case in which Dershowitz defended Epstein, who later served 13 months in prison for the sexual abuse of underage girls.

In addition to this demonstration, protest organizers also distributed pamphlets with statistics about sexual assault and rape and collected donations for the Syracuse-based McMahon/ Ryan Child Advocacy Center, which fights against sex-trafficking.

“The demonstration in response to Alan Dershowitz speaking on campus [was] part of a concerted effort to fight the rape culture all too pervasive at Colgate University,” the statement from the protestors said.

Dershowitz responded immediately to the protestors, accepting their protest but requesting they still listen to his lecture. He referenced the protestors again throughout his talk, specifically during the question-and-answer portion. Dershowitz said he wished some of the protestors had stayed to ask him questions or make comments, and invited them back inside to participate.

“I invite the students who are protesting to listen to what I have to say,” Dershowitz said. “I admire your protest and I accept your protest as a form of disagreement.”

Dershowitz also responded to the original poster protest, which asked whether Colgate should allow him to speak. He said the allegations referenced in the posters were proven false, and evaluated the statistical improbability of their validity. He said that a focus on false accusations actually harms sexual assault survivors and the Me Too movement.

Dershowitz said that the poster’s use of the statistic that 2.1% of people accused of rape are not guilty was reminiscent of the Ku Klux Klan’s manipulation of statistics to justify the execution of African American men based on false rape accusations.

“Shame on them who would convict people based on questionable statistics that aren’t applicable to the particular case on issue. To say that all men who are accused are guilty of rape is very much the same as saying that no men who are accused of rape are guilty,” Dershowitz said. “Every time a radical feminist issues a false accusation as those who produced this pamphlet did, it puts an arrow through the heart of the important Me Too movement.”

Dershowitz used the posters as a jumping off point to discuss the threats to free speech on college campuses. He said that political extremes on both sides must consider what he calls the “shoe on the other foot” test, meaning they must flip free speech questions to hypothetically challenge their own views, and assure they would react in the same way.

“It’s a political application of the golden rule, and that is, would you be making the same arguments that you are making today if the shoe were on the other foot? If the people who were being victimized were your political enemies instead of your political friends?” Dershowitz said.

His talk primarily focused on the importance of both free speech and due process, and his fear that students cannot recognize the importance of these systems due to extreme political views and an inability to have challenging conversations.

Dershowitz said the answer to national bipartisan tensions, then, lies in universities and their ability to remain steadfast in their free speech policies.

Sophomore Claire Bergerson said that she ended up agreeing more with Dershowitz’s lecture than she had anticipated.

“I went into the lecture wanting to dislike him because of his stance defending Trump. However, I thought he was articulate and moderate and made a very good case for why the justice system is being [used] to criminalize our differences,” Bergerson said. “While I think free speech serves a different role in the current era of the Internet, I agree with the importance of defending it voraciously.”

In preparation for the lecture, the leadership of the Center for Freedom and Western Civilization met with the Office of the Dean of College and Campus Safety to ensure the safety of attendants at such a controversial event.

“You definitely don’t want a situation to go out of control, but you also want people to speak,” President Brian Casey said. “Our own statement of free speech says you have to look at context and you have to be cognizant of our most vulnerable people. You have to, the faculty endorsed that, so we will.”

In addition to these security precautions, the Center for Freedom and Western Civilization, the Office of the President, Student Government Association (SGA) and the Task Force on Freedom of Expression and Academic Freedom sponsored a “high tea” to discuss Dershowitz’s lecture on Thursday, November 1.

Casey said the controversy around Dershowitz’s invitation is particularly difficult because there are multiple groups of students made vulnerable by his presence, specifically Jewish students and survivors of sexual assault.

“[This is] what universities do. The nation’s not doing this well as any most recent examples in the Senate might prove to us… [Universities are] a place for the nation to work out how we deal with these situations, [but] that doesn’t make it any easier. There’s no easy solution for any of these things, as much as I wish there were,” Casey said.