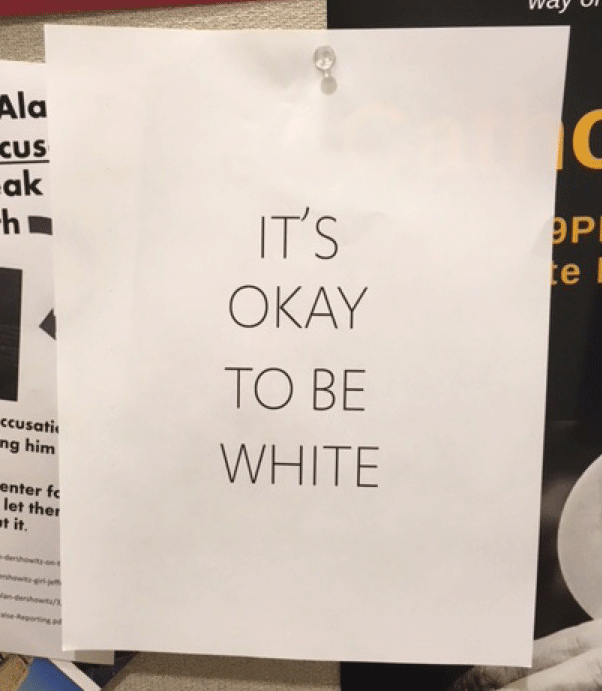 Posters have appeared on campuses across the U.S., including Colgate’s.

Last year, I wrote an article about the phenomenon of the “It’s Okay To Be White” flyers that appeared across American campuses in a Being Right/What’s Left column with my colleague Fabrizio Herrera—you can read my piece, as well as Fabrizio’s, by checking the Colgate Maroon-News website and searching for “Alt-Right Posters.” This year, on Halloween, flyers stating “It’s Okay to Be White” appeared again at various American institutions—including Colgate.

I stand by many of the points I made last year in the abstract. The most important among those are that we ought to consider what the statement means instead of initially dismissing it out of hand due to its origins. But it’s a different topic to handle when the personal is involved, and people are much quicker to jump to a charged, emotional response. What does it mean that this phenomenon has penetrated the Colgate bubble? Does it mean that there is an underground white nationalist network at Colgate?

No, probably not—though you would think otherwise to hear some of the community’s responses. Over the last week, I’ve heard these otherwise innocuous posters referred to as “hateful,” “racist,” and, most of all, “white supremacist.” While I still believe that it is ridiculous to call a poster stating something that should be gleefully accepted in our universally inclusive atmosphere “hateful,” more importantly, when you shout that these posters represent white supremacy, you are playing exactly into the hand of the Alt-Right ideology in putting them up.

These posters are intended to carry the least offensive message possible so that it appears ridiculous to call them “hateful” or “racist,” specifically so that the Alt-Right can make their opponents look foolish at best and hypocritically racist at worst. Yet people continue to call these messages “hateful” and “supremacist.” To you I ask—what are you doing? Do you understand that in attacking these posters, you appear to be attacking their message? Do you not care about the fact that doing so is likely to offend and radicalize people towards the Alt-Right, just like their original intent was? Do you intend to actually attack their message on its own, uncaring of whatever hypocrisy it might bring?

I have no doubt that the administration is preparing a response to these posters and if they aren’t, they should be. Make no mistake, this is a critical incident in Colgate’s understanding of political speech and consequence. To trivialize that decision would be a serious mistake, and this should be a very carefully considered response. Touting the basic line of hate speech, as many other universities have done, lends credence to the intent of the postering—to present advocates for equity as disdainful of white identity itself. The medium and message must be thoroughly and completely disassociated from its originator, and an effort must be undertaken, both by the administration and the student body, to understand why these posters have begun to appear at Colgate.

I don’t have the answers to those questions—I’m just a political columnist. All I can do is ask you to consider it yourself and to, at all costs, keep the posters separate from the poster-maker.