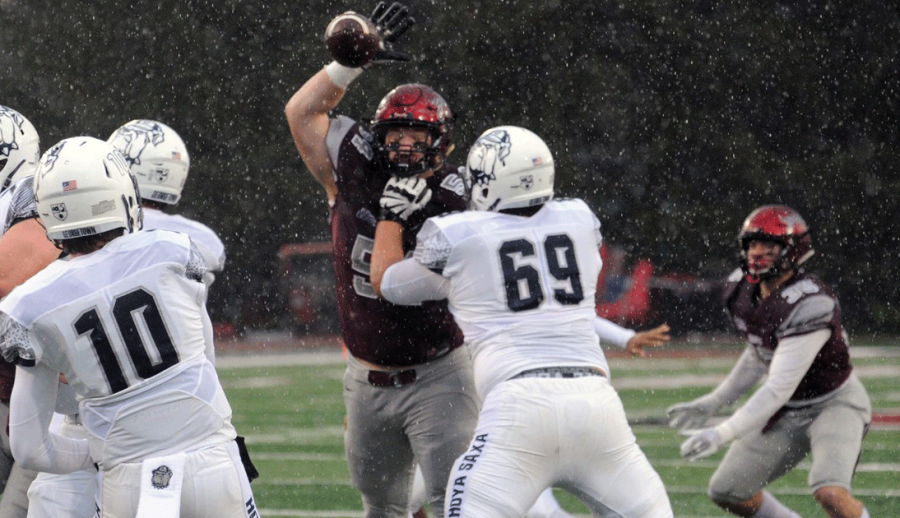 Colgate football continued its dominance this year by defeating Georgetown 38-0 on Saturday, October 27, giving the Raiders sole possession of first place in the Patriot League as well as a twelfth straight win, which gives the team the second-longest winning streak in the nation. The win moved the Raiders into 11th place in the associated press poll. After missing out on the playoffs last year, this years team has returned with a vengeance looking to make up for a couple costly mistakes they made in 2017 that kept them out of the national championship hunt.

The team still has the memories of last season’s disappointment in the back of their mind.

“We were all very focused on improving over last year. We were a good team last year, but we made enough mistakes to not get to the playoffs. From the minute last season ended, this group was focused on being the absolute best we can be. We look at the Patriot League season as a tournament. The Georgetown game was round 4, and we have to win them all in order to control our destiny for the playoffs,” Head Coach Dan Hunt said.

The Raiders came out slow in the first quarter, turning the ball over and punting respectively on their first two drives. After getting the ball on their own twenty-two, the Raiders drove the ball downfield fueled by James Holland’s 48 yards on the ground. With the ball on the one-yard line, sophomore quarterback Grant Breneman took the ball three feet to give the Raiders a 7-0 lead.

The Raiders continued to dominate throughout the second quarter. After the defense forced a four and thirteen, it took the offense just four plays for Breneman to once again take the ball a yard into the end zone and double the Raiders lead. The defense again forced a three and out on the next drive, but the offense struggled to move the ball and had to settle for a twenty-two-yard field goal from junior Chris Puzzi.

The Colgate defense once again came up huge their next time on the field as on a third and eight in Raider territory, senior Alec Wisniewski intercepted a Georgetown pass and took it fifty-five yards into the end zone to give the Raiders a 24-0 halftime lead. The teams traded drives at the beginning of the third quarter and the Raiders were finally able to find their rhythm again after taking over at their own thirty-two with eight minutes left in the quarter. On the first play of the fourth, junior tailback Alex Mathews was able to find the end zone and extended the Colgate lead to 31-0.

Colgate once again started moving the ball from their own forty as they used a series of ground plays to wind down the clock. Senior Sage Attwood picked up 35 yards on the drive, including a four-yard end zone run to push the score to 38-0 and put a bow on the win.

With the win, the Raiders move to 7-0 overall and 4-0 in the Patriot League, with sole possession of first place. The team is one of just four remaining undefeated teams and has outscored opponents 164-3 in the last five games. The Raiders continue the season next week at Fordham University.