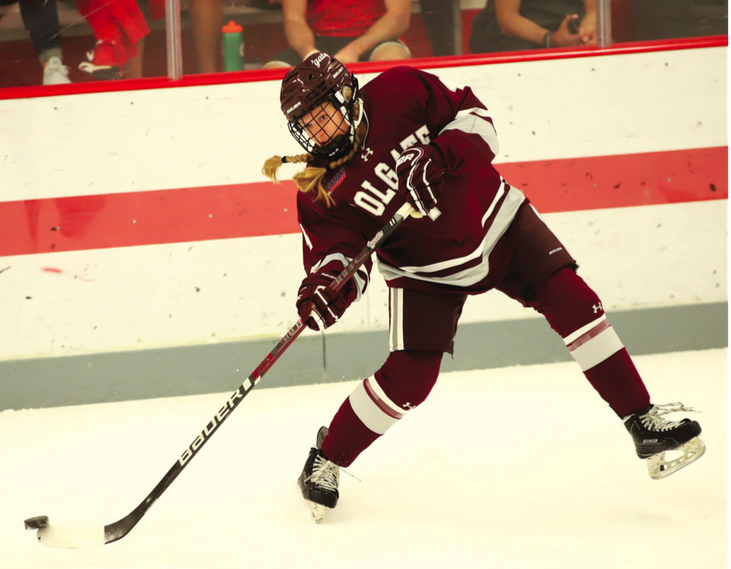 Senior forward Shannon Ormel flicks on a pass to spark an offensive possession. Colgate women’s ice hockey seems to be hitting their stride at just the right time.

The Colgate Women’s Ice Hockey team was back on the road this past weekend in Moon, Pennsylvania to play in two out-of-conference games against the Colonials of Robert Morris University. Ranked number 10, Colgate was coming off of a strong 5-2 away win against Yale the previous weekend.

Colgate kicked off their first game Friday night, scoring about halfway into the first period with an unassisted power play goal by senior forward Jessie Eldridge. This was Eldridge’s second goal and fifth point in the last five games. The Raiders finished the period leading the Colonials 1-0.

Seven minutes into the second period, the Raiders doubled their lead with a goal by sophomore forward Coralie Larose, assisted by first-year forward Nemo Neubauerova and senior forward Shae Labbe.

The Raiders wasted no time as senior forward Bailey Larson scored for Colgate making the score 3-0 with nine minutes left in the second period. Larson’s goal was assisted by first-year defender Tanner Gates.

Colgate continued to put pressure on the Colonials as Eldridge scored her second goal of the game with assists from Larson and sophomore forward Malia Schneider. The Raiders finished off a dominant second period with a 4-0 lead over Robert Morris.

Although they entered the final period of play down 4-0, Robert Morris was not ready to quit. Nine minutes into the period, Robert Morris got on the board, scoring a power play goal to make the score 4-1. Four minutes later, the Colonials scored another power play goal. With two minutes left in play, Robert Morris scored their third goal of the game, making the score 4-3. The explosive comeback was not enough for the Colonials, however, as the Raiders finished off a 4-3 in their first game of their double header in Pennsylvania.

The Raiders were back to work on Saturday hoping to close off another weekend sweep. Schneider quickly scored only twelve minutes into the first period with an assist from Larson and Gates to help Colgate lead 1-0 entering the second period.

Less than a minute into the third period, Colgate got to work. First-year forward Eleri MacKay scored a goal to give Colgate the 2-1 lead. Eleri was assisted by her twin sister forward Delani MacKay and classmate forward Rosalie Demers. However, three minutes later, Robert Morris matched Colgate’s second goal making it 2-2.

Sixty minutes was apparently not enough to decide a winner, as the score was tied 2-2 after three periods. The game went into overtime for five extra minutes, but still ended in a tie, bringing the Colgate’s record to 7-4-1 overall.

The next two ECAC games for the Raiders represent their toughest tests of the season so far. On November 16 at 6 p.m., the Raiders (second in the conference) go up against Princeton University in New Jersey. The Tigers currently sit at the top of the ECAC standings, boasting 17 goals in only eight games thus far. The next day, November 17, Colgate faces off against rival and perennial hockey power Quinnipiac, who sits in 4th place in ECAC. Tune in to both games on ESPN+ and enjoy some exciting Colgate women’s ice hockey this Thanksgiving break!