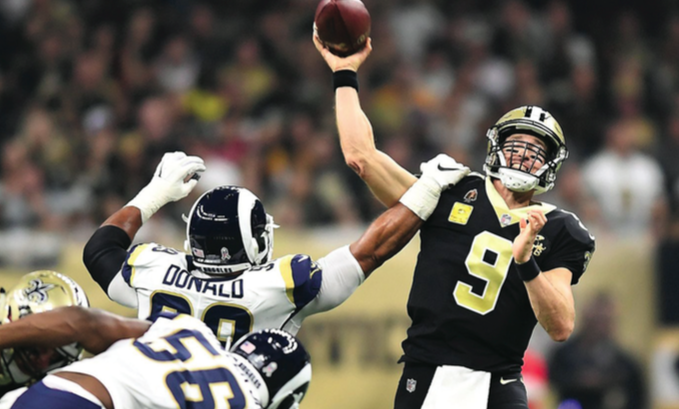 As the NFL season passes its halfway mark, the perennial race for the league’s Most Valuable Player is beginning to take shape.

Kansas City Chiefs quarterback Patrick Mahomes seems to be a clear front-runner at the moment.

The second year gunslinger has burst onto the scene out of nowhere, pacing the league with 29 passing touchdowns through nine games after spending almost all of his rookie season riding the bench, with the exception of one game.

Many expected the young QB to go through growing pains in his first season as starter, but Mahomes has been the general of arguably the league’s most electric offense, leading the Chiefs to eight wins against just one loss.

While there is no signs of Mahomes slowing down, other players around the league are beginning to insert their names into the conversation, including one quarterback who has been overlooked throughout his career: New Orleans Saints quarterback Drew Brees.

Brees has lead the Saints to a 7-1 record, including last week’s 45-35 offensive shoot- out victory over the previously undefeated Los Angeles Rams.

Though he lacks the same gaudy numbers as Mahomes or other MVP frontrunners like running back Todd Gurley, Brees has arguably been the most valuable member of his team than any other player.

He takes care of the ball better than any other QB, throwing just one interception this season compared to 18 touchdown passes. Brees has been the definition of consistency, just this season becoming the fourth player in NFL history to throw over 500 touchdown passes in his career.

He also surpassed Peyton Manning to become the league’s all-time leader in passing yards with over 71,940.

Brees has added many NFL records to his name and is a shoe-in Hall of Famer. Despite these feats, though, he’s never won MVP. That could change this season.

Brees will not be able to count on his career numbers to give him an advantage in the MVP race, and he’ll have to stave off other players hunting for the award – a group that includes Mahomes, Gurley and other surging players like Cam Newton, Tom Brady and Philip Rivers.

He will likely have to see a slight uptick in touchdowns to gain ground on Mahomes in the race, but with a fantastic supporting cast on offense that includes elite skill players like Alvin Kamara and Michael Thomas, he has a very good chance to run the table and make his case for the award.

Brees is also playing behind one of the league’s best offensive lines and a respectable defense, and it looks like the Saints will be Super Bowl contenders for the second year in a row, adding to Brees’ worthiness of the MVP Award.

The MVP award voters need to take into account more than just statistics when deciding a winner. Brees probably won’t have the same flashy numbers that Mahomes will at the end of the season, but that doesn’t mean he hasn’t been the most valuable player to his franchise over the course of the year.

Brees provides unquantifiable benefits to the Saints, including leadership and a steady veteran presence that is crucial for winning games.

With the uncanny consistency that Brees has throughout his career, there’s no doubt he’ll continue to perform at a dominant level.

This season alone, Brees has led the Saints to big fourth quarter comebacks against the Ravens and Browns, and has won games against quality teams like the Rams, Redskins and Vikings.

Brees has quietly gone about his business for the entirety of his career, never really gaining the same level of recognition as Brady, Manning or Rodgers despite being equally as impressive.

Expect that to change this season.