While Contenders Rise to Challenges of Rivalry Week, Michigan Falters 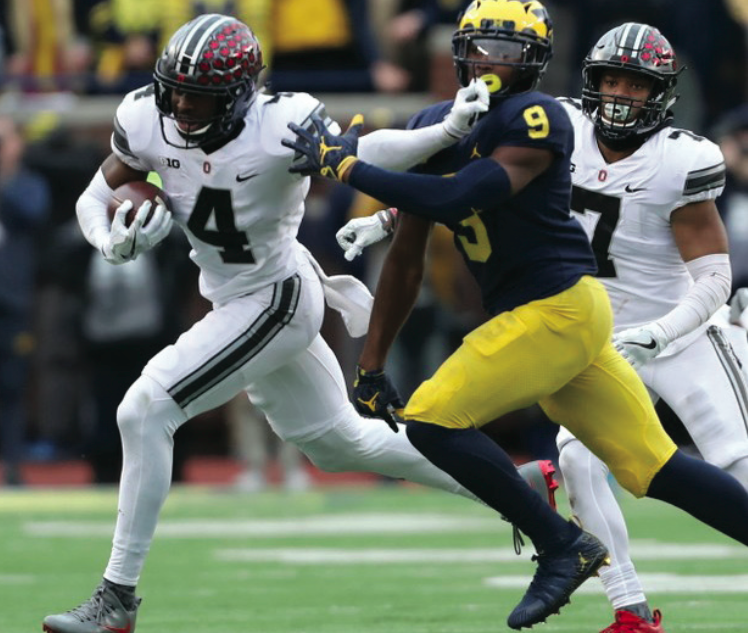 Saturday afternoon had to feel like the continuation of a never-ending nightmare for coach Jim Harbaugh and the Michigan Wolverines. Once again, Michigan fell victim to arch-rival Ohio State, as coach Urban Meyer improved to an unprecedented 7-0 against the Wolverines.

It was supposed to be different this time, though. Since suffering an early sea- son loss to the now third ranked Notre Dame Fighting Irish, the Wolverines had rounded into form and avenged losses from last season to Wisconsin, Penn State and Michigan State on what senior line- backer Chase Winovich dubbed the teams “revenge tour,” outscoring those teams by a combined score of 101-27.

With the best statistical defense in the country and an emerging offense, Michigan looked every part a team worthy of making its first trip to the College Football Playoffs.

However, one last stop on the revenge tour remained: Ohio State.

Even though Michigan had lost six games in a row and 13 of its last 14 to its hated rival, this year felt different.

While Michigan enjoyed its winning streak, Ohio State looked like a team limping toward the finish line.

With questions surrounding Meyer’s health and an extremely vulnerable defense, Ohio State had not nearly performed up to its lofty expectations for this season and needed over- time to beat Maryland the previous weekend in College Park.

This led to Ohio State being an underdog for the first time since the 2014 National Championship against Marcus Mariota and the Oregon Ducks. All signs pointed to a Michigan victory. A win would see Michigan heading to Indianapolis to take on Northwestern in the Big Ten Championship for a spot in the College Football Playoff.

Everything seemed to be going Michigan’s way, that is, until kickoff. After quickly going three-and-out on its first possession, Ohio State struck nearly a minute later and took a 7-0 lead, showing the kind of speed and athleticism that had people drooling about this team’s potential in the beginning of the season.

The Buckeyes never looked back. Even though Michigan cut the deficit to five points at halftime, the outcome of the game was never seriously in doubt.

Ohio State dominated both sides of the ball, making sure Michigan quarterback Shea Patterson was under duress all game and allowing quarterback Dwayne Haskins to throw for 396 yards and a whopping six touchdowns without being sacked a single time.

When it was all said and done, Ohio State found itself celebrating a 62-39 victory over its hated rival, silencing many of its critics with its most complete performance of the season.

Michigan proved no match as it was thoroughly outplayed and out- coached by Ohio State for four straight quarters. Once again, Meyer had his Buckeyes ready to play and Harbaugh simply had no answer.

“They slowly devastated us throughout the game. Knowing all the yards they were putting up and how easily they were scoring, it was tough. It was very tough. They completely beat us everywhere. Run game, pass game, everyone is to blame,” Michigan senior safety Tyree Kinnel said.

With the loss, Michigan dropped to 10-2 but will still likely receive an invitation to a New Year’s Six game in recognition of their season. However, schools like Michigan are expected to compete for titles, and that starts by winning rivalry games. The Wolverines have simply not been able to do so.

Every other contender besides Michigan won its rivalry game, whether by thirty like Alabama, or by the skin of its teeth like Notre Dame.

In order to be a national champion, you have to rise to the occasion and play your best football in important moments. Teams like the Alabama Crimson Tide are called winners for this reason.

Unfortunately for Michigan, it lost both of its games against elite competition this year and will once again be watching the College Football Playoff on TV, rather than sinking their teeth into the competition.